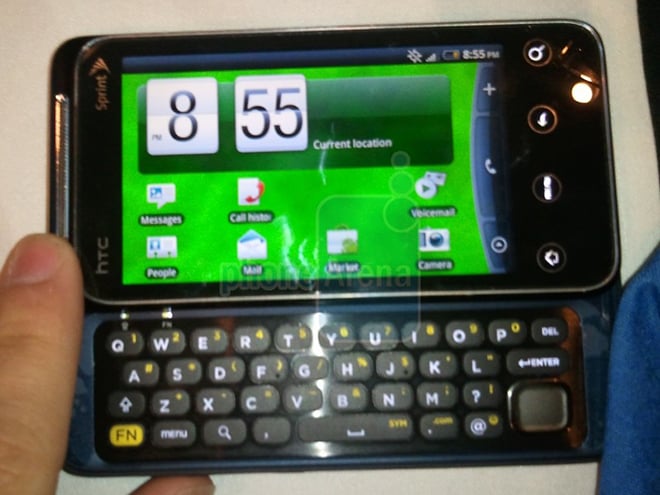 A few weeks ago, we saw a spy shot of the Sprint HTC EVO Shift 4G enclosed in a rugged case. Today, we have a series of images that show the front, the back, and the lovely keyboard of this side slider. Taking a closer look, we see the standard physical landscape keyboard with optical trackpad. There is also a pair of LEDs on the keyboard for the shift and function key. The back of the phone is home to a large camera module and a flash. At the top of the handset is a headphone jack and a possibly the power button.

According to the source of this leak, the HTC EVO Shift 4G will include an 800 MHz processor just like the T-Mobile G2. Before you start complaining about the 800MHz processor, take a look at the T-Mobile G2. The G2 was criticized when it was rumored and then confirmed to have an 800MHz processor. Subsequent benchmarks and overclocking efforts allayed all performance fears. Hopefully, this next generation Android handset from Sprint will have similar standards of performance. For those keeping track, the Shift EVO 4G is expected to run Android 2.x with Sense UI and may launch as early as January 2011. Anyone interested?