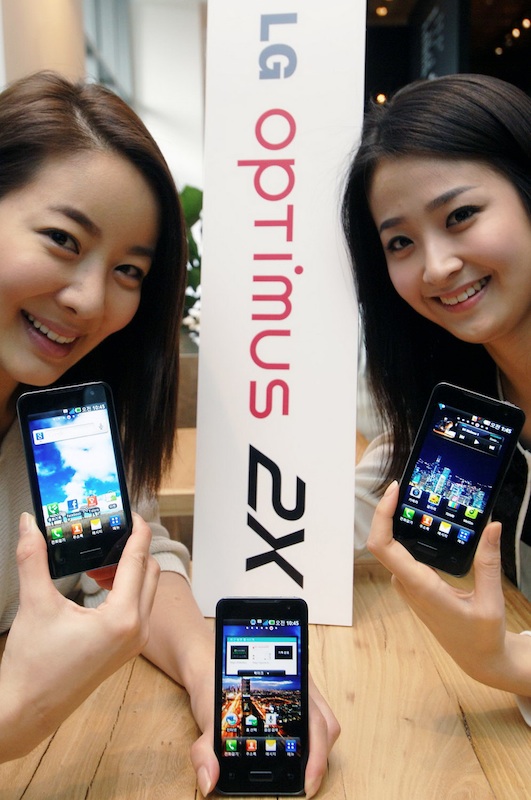 LG recently announced the Optimus 2X, billed as the first dual core smartphone to be revealed to the world. That doesn’t really mean much since the first Qualcomm Snapdragon product to be announced was the Toshiba TG01 and it was a steaming pile of Windows Mobile 6.1 running poop. It was only until we got to play with the Nexus One that we got to see the Snapdragon shine. Anyway, we haven’t played with the Optimus 2X, but knowing how badly LG is doing in the smartphone space, we wouldn’t be too surprised to hear it being buggy, built poorly, and overall just an undesirable product. Negativism aside, this will be the first smartphone to ship with NVIDIA’s Tegra 2 chip inside. That puppy comes with two ARM Cortex A9 processors and a graphics processor that has yet to he benchmarked, but since it’s coming from one of the world’s premier graphic companies, it probably packs one hell of a punch.

The question on everyone’s mind is when will this thing hit America shores? Sources who have spoken to RCR Wireless say it’s coming to T-Mobile in March, which again, wouldn’t surprise us since they’ve been trying to differentiate themselves by offering a large range of Android handsets at multiple price points, from the Huawei IDEOS on the bottom to the G2 on top. By the time March roles around however we should hear about dual core devices from everyone, including HTC, Motorola, and Samsung. The Optimus 2X will be long forgotten by then, and it’ll sell remarkably well in South Korea, but no where else.

Price point? It’s officially unknown, but we’ve seen it go for 5,000 Swedish kronor or roughly 560 Euros ($735). You pay a premium for performance, but that much for something that isn’t built by a handset maker we love and respect is a bit much.

We know that the Motorola Android Honeycomb tablet will be making an appearance in a few weeks at the CES trade...