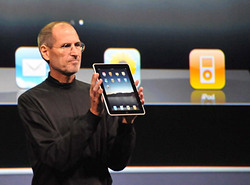 It’s been nearly a year since the Apple iPad has been announced, so we’re expecting the next generation model to be unveiled in the coming weeks. Now is as good a time as any to start speculating and gathering information on what the next-gen iPad, which we’ll call the iPad 2 for now, might have. To date, we’ve heard all kinds of things from mini-USB ports to space-age, lightweight materials. Now we’re hearing that the iPad 2 will have a smaller bezel and have a back similar to the iPod touch.

According to the source, the LCD screen on the next-generation iPad will stay the same size, while the new tablet will be 3mm smaller, reportedly measuring 239mm by 186mm. The current iPad, which measures 242.8 mm by 189.7 mm, was criticized for its wide bezel when it was first unveiled in January.

Apple will reportedly change the back of the new iPad to be “flat like an iPod touch,” which would also resolve criticisms that the iPad’s curved back is impractical. According to the report, the Ambient Light Sensor has been moved to the “upper center of the rear panel” and has a new 3mm slim hole.

By “3mm smaller,” I’m sure they mean that it will be 3mm all around (because 3mm thinner seems kinda crazy), which would undoubtedly shave quite a bit of weight from the iPad. And for those of us who own an iPad, I don’t have to mention how cumbersome it can be to hold the thing sometimes – because of both its form factor and weight.

The rumor also says that there will be a large, “wide-range” speaker system on the bottom of the iPad 2 and it will be covered with mesh.

The iPad was unveiled by Apple in January, so it would be safe to assume that we’re just a little over a month away until the announcement of its successor. Until then, I’ll only grow more curious as to what the new device may feature.