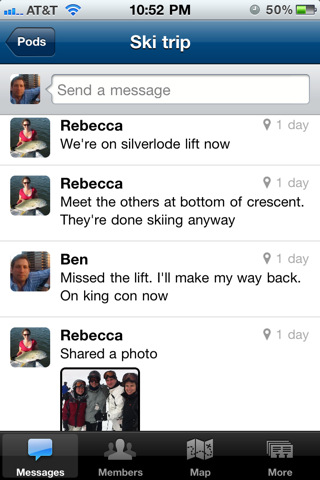 One of the reasons RIM is so successful with their BlackBerry lineup of smartphones isn’t the push email, nor the long battery life of their hardware, but instead it’s the instant messaging platform dubbed “BlackBerry Messenger” which features group chat capabilities. Looking to capitalize on this success, three former Google employees just launched their take on the group chat phenomenon with “Beluga“. Initial platforms compatible with the service are Google’s Android operating system and Apple’s iOS. There’s also a website, but it’s meant for desktop use, not mobile. The three former employees from the search giant are: Ben Davenport, who helped build Google AdSense and also dabbled in high frequency trading, Lucy Zhang, who helped design and develop products such as Google AdWords, Google News and Google Docs, and finally Jonathan Perlow who was a Senior Staff Engineer at Google where he was the tech lead of the Gmail front-end team focusing on user interface and server scalability. He was also responsible for Gmail Chat and Mail Goggles.

That’s a remarkable set of talented minds, but I’ve got to ask, what’s wrong with text messaging? It doesn’t need a smartphone to work, and while SMS doesn’t have a group chat feature enabled, you can just send the same text to multiple people. Old school? Sure, but I still don’t see the point of joining yet another service just so I can share status updates and pictures with people who may not even be that close to me. If they are close, I’ll just talk to them the next time we chat over coffee.

What say you, is group chat hot or not and are you simply waiting for Facebook to build said feature inside their already wildly used instant messaging system? If you use BlackBerry Messenger, how addicted are you to the service anyway?