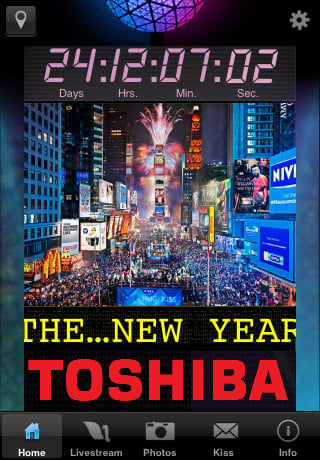 Toshiba has just released an iOS [iTunes link] and Android application that will allow people to watch and interact with the ball drop in Times Square, New York. Since Toshiba manufactures the gargantuan displays that show ads and the inevitable countdown to 2011, it’s a nice way to promote their brand and maybe, just maybe, you’ll pick up one of their HDTVs when you’ve got enough spare cash laying around. Features include a live stream and the ability to upload photos that people can vote on; get enough votes and your photo is shown on said screens. Gimmicky? You bet!

Here’s a challenge for the mobile obsessed: instead of standing out in the freezing weather with your face buried in your smartphone, why not actually talk to the people around you, ask them how their year went, how they celebrated Christmas, and try to make a new friend? Don’t be one of those guys, who goes to an event and prefers to watch it on a 4 inch screen instead of looking up and marveling at the massive amounts of confetti that’s set to drop once the clock strikes midnight.

What are you planning to do for New Year’s anyway? Any particular smartphones you’re looking forward to? There’s the next iPhone, due to be announced in the summer, and of course a slew of handsets from Motorola, HTC, and Samsung, all running Android, that will most likely be announced at Mobile World Congress in February. There’s also Nokia, who after making Symbian open source and trying to get people to use said source code for the past 2 years, has finally given up on that experiment and is bringing the team back internally. MeeGo and webOS? The two underdogs that many analysts are hoping will become somewhat relevant, but the odds are stacked against them.

Skyfire for the iPad has been approved!

A few days ago we were told that Skyfire, the ever so popular app that chews up Flash and spits...