Earlier this month, Epic Games & ChAIR Entertainment released Infinity Blade for iOS, which is an action-RPG set in a medieval setting powered by Epic’s Unreal Engine. It’s the first time the Unreal Engine has made it to the mobile platform, but Trendy Entertainment has released another title that uses Epic’s Unreal Technology. Dungeon Defenders is a hybrid of action-RPG and tower defense that works together to offer a beautiful mix in a pretty Unreal Engine package.

Dungeon Defenders takes place in the country of Etheria where you play as one of four children of the land’s living legends. Each character has their own specific gear that can be equipped, attacks, and towers that can be built. As you defeat wave after wave of enemies, your characters will gain experience which can be used to upgrade your character or their towers. You’re not tied down to one character class as you can choose all four classes and level them up individually. Not only can you experience each character class to see which you prefer to play as, but you can also change to another character while you play to one you already created. 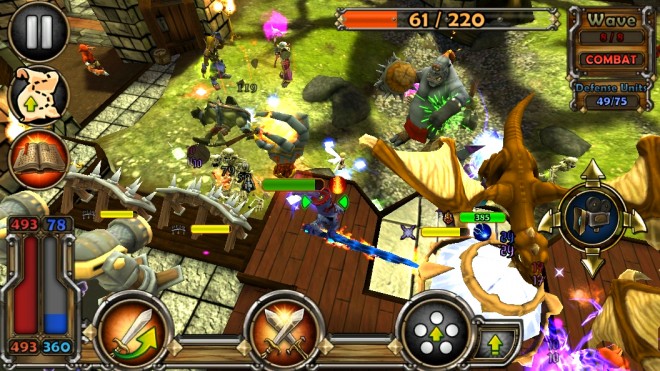 As the name suggests, most of your time will be spent in one of Dungeon Defenders’ dungeons. Each dungeon has a unique layout and requires the player to use different strategies as to where their towers should be placed. In order to summon a tower, you’ll need mana which can be acquired by picking up mana jewels dropped by defeated enemies or from treasure chests that are placed throughout a dungeon. At first, your tower summoning will be limited to one tower, but as you level up, you’ll be able to summon more towers each requiring a certain amount of mana to summon. Each tower has their way of attacking or stopping enemies and it’s up to the player to figure out what the best strategy would be for each tower.

When you enter a dungeon, you’ll start off in the Building phase which allows you to take your time and build your towers in spots the player feels would be the most effective. This is where the game’s map plays a crucial point in tower summoning as you can see where the enemies will be entering the dungeon from to which you can plan your towers accordingly to stop them from destroying the Eternia Crystal. Once you complete the building phase, you’ll need to touch the Eternia Crystal in order to initiate the combat phase. Most tower defense games has you building your towers and hoping for the best, but Dungeon Defenders allows your character to take the fight to the enemy themselves as you can attack them with your weapon or cast spells to defeat your enemies. This game mechanic offers a breath of fresh air from the typical tower defense experience. 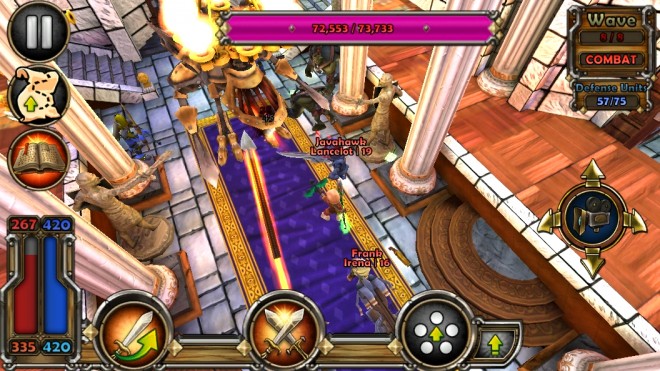 Dungeon Defenders has two modes of play: Local or Online play. As the names suggest, you can either attempt to fight off wave after wave of enemies by yourself through local play, or you can join up to four players online and team up to fight off the invading horde. Online play was surprisingly smooth and easy to set up. If no games are found online, you can just create your own game to which any players looking for a game will instantly join your game. You can also choose to invite your friends to a game through Apple’s Game Center.

If you have an iPad you’ll be happy to hear the game is a universal app, so you can play on either your iPhone or iPad for one price although any characters you create on each iOS device will only be available on that device. The iPad version played just as well as the iPhone version, although I felt the size of the on-screen buttons could have been toned down a bit since it feels like much of the iPad’s screen was taken up with unnecessarily large buttons. The large buttons also required much effort in order to issue a command. For a game like this, the game would be much easier to control if all of the important buttons were within the reach of a thumb tap.

FINAL THOUGHT: Dungeon Defenders is my favorite tower defense game as not only can you summon towers to fight off enemies, but you can also fight creeps yourself. The game looks great thanks to the Unreal Engine and leveling up your character is addictive. The game’s eight dungeons will keep you entertained whether you try to take the creeps on yourself or join others online. If you’ve ever wished tower defense games could be more action-RPG, then Dungeon Defenders is your game.

Dungeon Defenders is available for Android as long as you have the following basic requirements: