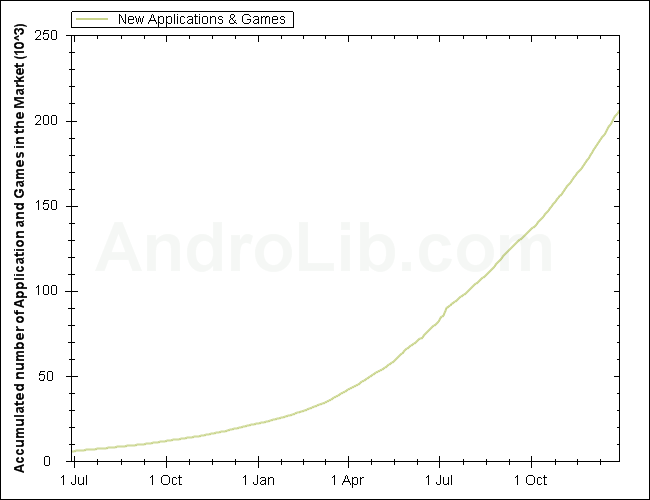 It’s been tough catching up to the king of the mountain, but Google is getting up there with the number of apps available in the Android Market. According to AndroLib, the open platform now has over 200,000 available applications. That’s some impressive growth considering the fact that Android is just a little over two years old.

Of course, the growth spike seems to have occurred in just the past two months. On October 25, we reported that Google announced its 100,000 app milestone – and two months later other reports are saying that the Android Market has well over 200,000 apps? If these figures are correct, that’s one whopping increase in such a short period of time.

Additionally, by the same firm’s count, over 2.5 billion apps have been downloaded from the Android Market since its launch.

The Android Market is going to see some major overhauls in the coming weeks, and we’re pretty excited to see things get cleaned up. A few tweaks have been made recently to make searches a little easier and more relevant, but it really needs something bigger. It also needs to have simpler payment methods or perhaps single-click options to purchase apps.

While the growth has been impressive, there is still quite some way to go in catching Apple. iOS continues to grow with steadily increasing iPhone 4, iPod touch and iPad sales, but Android market share is booming. The sheer number of devices has made it impossible to think that iOS market share will ever really dominate the top spot. It’s just that the lack of polish in some Android apps and the disorganized Market make it difficult to want or find – and ultimately pay for – some applications.

Now all we have to do is sit and wait for Google to confirm these figures before we go off making judgments about them. Until then, let’s just cross our fingers that the Android Market gets sorted the way it should and that the quality of apps getting pumped out gets better.

REVIEW: Google Nexus S – Does this Android phone live up to the Nexus name?

The latest addition to Google's Nexus superphone lineup is the Samsung Nexus S, and it's the first Android handset to...