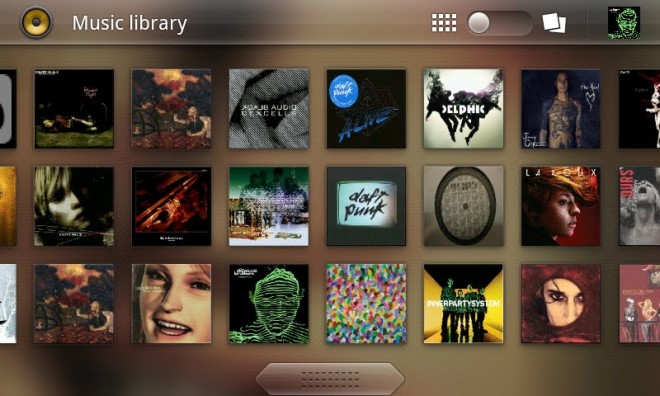 A couple of days ago the Android (whatever version number it turns out to be) Honeycomb music player leaked out to the masses in beta form. As per usual, we jumped on the story soon after we got word about it. Unfortunately, we neglected to give the download link, so we’re going to give this a try one more time.

While the look and feel of the new music player shouldn’t surprise anyone at this point, we’re wondering just how many other apps will begin to see this sort of face lift in Honeycomb. Taking cues from the CoolIris-made 3d photo gallery for Android, the music player should be a good indication that the next version of the OS may boast 3D aesthetics to some extent. And, if the Tegra 2 is to be the go to CPU for Honeycomb, then these types of devices should deliver the 3D capabilities that Android Honeycomb is expected to offer.

Whether or not Honeycomb will actually make it to smartphones is still an entirely different question, but with devices like the LG Star coming to market, I don’t see why not. It would be unfortunate (and rather lame of Google) if they kept Honeycomb on tablets when some phones would be completely capable of running the new version of the OS. That said, since it may only be some phones that have the guts to take on Honeycomb, it would make sense to limit Honeycomb to more powerful devices. It wouldn’t be Google’s fault that a handset maker doesn’t put the most powerful guts in a smartphone, but users will likely still blame the Big G.

Who knows, though. Maybe this wont be much of an issue at all, as the music player runs just fine on my G2 and G tablet. Nonetheless, we don’t have much longer to wait to see what Honeycomb will offer, as Motorola is said to debut their new Honeycomb tablet at CES 2011 next week.

The player is still a test build, and not everything works at the moment. Playback can stutter a bit, but if you want to take one extra step towards Honeycomb, hit up the link below.

Microsoft co-founder Paul Allen is laying the smackdown on technology companies, as the billionaire is renewing his efforts to sue...