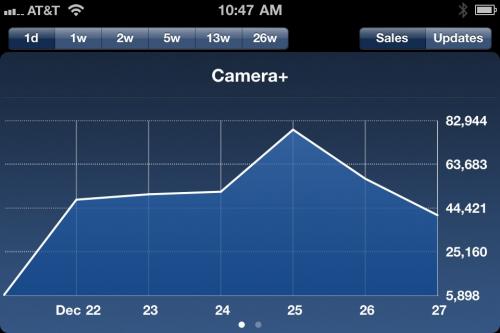 When Camera+ was released again after a few month hiatus, I was a little skeptical about just how well it would do in a sea of photography apps. Of course, it has some big name backing – I’m sure every photographer out there who belongs on a social network of some kind knows who Lisa Bettany is – and it’s actually a really sweet photo app. The application adds so many more features and options that are lacking in the standard iPhone camera interface.

Over the holidays, app sales across most platforms saw a pretty big spike, and Camera+ definitely rode that wave. The app sold 78,000 copies on Christmas day alone, which is pretty impressive considering apps like Instagram hit the 100,000 mark in six days.

Camera+ reached an impressive 78,995 downloads on Christmas Day alone, which represents $54,743 for the developer after Apple’s 30% cut. While the sales graph seems to suggest that the sales have returned to pre-Christmas levels, the graph is somewhat misleading, as Camera+ had been ranked as high as #2 in Top Paid Apps before Christmas but today holds a rank of #13. Therefore, it seems that there has been a sustained boost in overall App Store sales since Christmas Day.

Over $50k revenue in a single day is impressive for a photo app, and it looks like Camera+ may continue to ride this wave well after the holiday season. We also have to consider that the earnings for the developer is for the app sales only, but there are plenty of add-ons and features that come as in-app purchases.

For more info on Camera+, check out the video demo below. In all, it’s not too shabby for a 99 cent app.