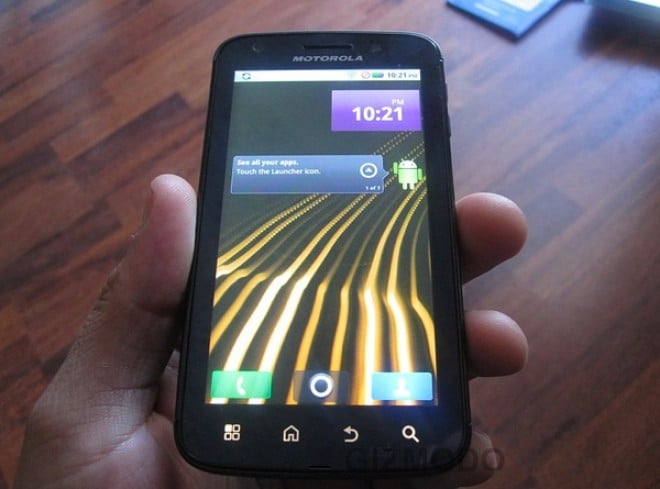 Next week is bound to be filled with a few surprises, and if this rumor from a tipster turns out to be true, the Motorola Olympus will be announced by AT&T at a press conference. This will mark the handset maker’s departure of solely making high-end Android phones for Verizon, and we can’t wait.

The Olympus is said to be one beast of a phone, sporting a 1GHz dual-core NVIDIA Tegra 2 CPU, a large display, and likely Android 2.3 Gingerbread. If the handset ships with Froyo, the buzz may not be as great, but the hardware is still impressive. This time frame certainly falls in line with the December or January date that we’d heard previously, but of course this could be subject to change. Still, we have a hunch that Motorola may be stealing the show in more than one way during CES next week.

While we’ve known about the Olympus for sometime now, we have since fallen for the LG Star. Will the Olympus be able to outshine the Star with its spec sheet? We’ll have to wait to find out, but the Star touts some of the most impressive specs we’ve seen on a handset thus far. Coming with a 4 inch display, HDMI out, front-facing camera, 1080p HD video playback, and more. Sounds great, right? Well, I’d be surprised if the Olympus didn’t at least meet the Star’s specs, if not exceed them.

The only thing I’m not loving about the Olympus is that it sports Motoblur, something Motorola just won’t let die. Blur likely won’t make a difference to many people, but I know wouldn’t grab it just for that reason. It’s a tad too kid-like for my taste, but of course, that can be fixed with home replacements.

Hopefully AT&T will be shedding some light on this device soon, and IntoMobile will be waiting to fill in all the blanks once it’s announced. Stay tuned for our live coverage from CES 2011!

There's good news if you're sick of having to look for a proprietary charging cable for your phone, as the...