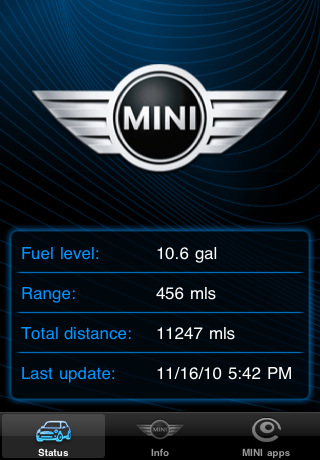 Not to be out-done by Ford, BMW has launched two apps for iPhone. One is for their Mini lineup which displays fuel status, sends Google directions to your car, link up web radio to the local stereo system, and keep tabs on RSS feeds. One of the cooler features is what they’re calling the Minimalism Analyser; basically, it scores your fuel efficiency based on how you drive, and compares you to other Mini drivers (though there’s probably a different app for comparing yourself to Minnie Driver). The other BMW app released is for ConnectedDrive cars (like we’ve seen work with BlackBerry), though supporting vehicles won’t be available until March. When plugged in via USB, an iPhone with the ConnectedDrive app installed will be able to display Twitter and Facebook updates as well as stream internet radio.

These are some pretty solid offerings and if it weren’t for Ford’s connectivity with other third-party apps in Sync, BMW would be providing something really comparable with these two apps. I’m curious to see if the OnStar app for the Chevrolet Volt will be beefed up beyond battery charge monitoring in order to meet the rising competition.

In any case, you can find the new BMW iPhone apps for download at the iTunes links below.