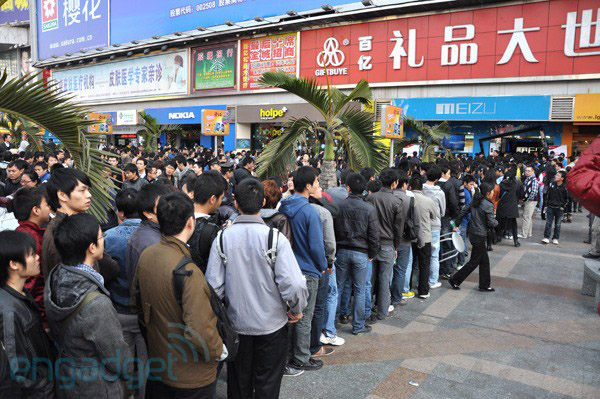 Grabbing a Meizu M9 unit seems as an awesome way to kick-start the New Year in China. As a matter of fact hundreds gathered in front of the company’s stores with the image above illustrating the craze in Shenzhen. According to Engadget, there were already about 60 people lined up outside at around 6am with few of them even arriving at 8pm last night.

The world’s most famous iPhone clone is not yet another feature-less ripoff from the world’s most populous country. Rather it’s a pretty awesome Android 2.2 Froyo-powered device sporting the iPhone-like 3.5-inch 960×640 pixels capacitive touchscreen, 1GHz processor, 5-megapixel camera with 720p HD video recording capability, WiFi (b/g/n), Bluetooth 2.1, GPS, along with an array of sensors that include an ambient light, proximity and gravity sensors. All this could be yours for $379 which is the price of the 8GB model, while its bigger brother packs an additional 8GB of storage and is available for $409.

Maxthon, which you may know for their desktop web browser, updated its mobile app allowing users to sync data between...