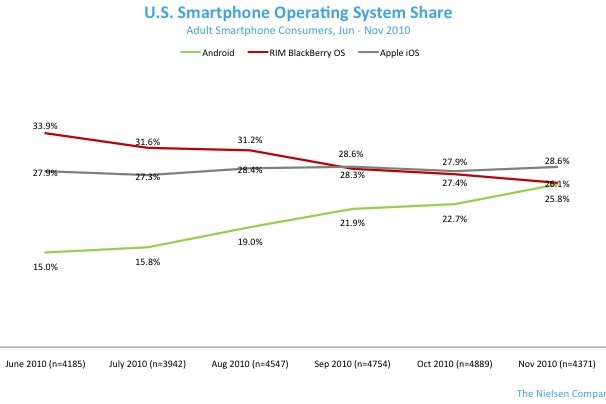 RIM’s U.S. smartphone market share continues to slowly but surely decline. According to Nielsen’s November data, iPhone continued its lead, which sat at 28.6% (up from 27.9% in June), with BlackBerry taking 26.1% (down from 33.9%), and Android 25.8% (up from 15%). Despite being in third place, Android has attracted the most new purchases in the last six months, giving it the most momentum of them all.

RIM might argue that there’s more to the mobile market than the U.S., but it’s not entirely a stretch to extrapolate these numbers and apply them to a worldwide trend. In global shipments, Apple and RIM are still neck and neck, and it will take at least another quarter or two to know for sure which one will take the lead. iPhone and Android are both hugely popular, but I find it funny that even with an army of manufacturers supporting Google’s OS, Apple has still managed to maintain the lead. I suspect that will change once 4G devices get launched, since I can’t imagine there being more than one LTE iPhone in the near future, and a wider variety of high-speed handsets will appeal to a broader audience.

Do you guys see this trend continuing? How long will it be until Android overtakes iPhone market share in the U.S.? How (or will) RIM be able to handle the competition until they cram out a dual-core QNX-running BlackBerry?

An LTE BlackBerry has reportedly been in the works for about the last two years, which is roughly the length...