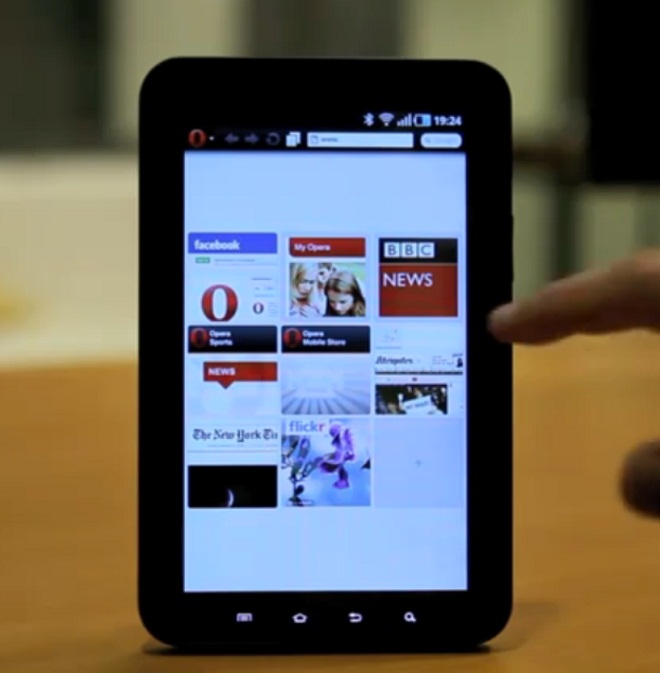 Opera is not going to let Skyfire get all the tablet browser love, as the company has demonstrated a sneak peak at its browser for tablets.

In the video below, you’ll get a quick glimpse of Opera for tablets and it appears to be running on the Samsung Galaxy Tab. Like with the desktop version, you’ll get the Speed Dial feature for quick access to your frequently-visited sites (like IntoMobile) and this one also includes multi-touch for zooming.

I wouldn’t expect for Opera for tablets to wind up on the Apple iPad though, as Steve Jobs’ company doesn’t allow other browsers on its iOS platform. But Marin, you ask, what about Opera Mini for the iPhone? That’s essentially just a proxy browser, so it technically falls within the rules.

The Opera for tablets looks like it uses the Mobile version of the company’s browser, which includes its own rendering engine. There’s a chance it may have switched to WebKit – which would make it okay for the iOS products actually – but it is much too early to tell.

Even if it doesn’t wind up on the Apple iPad, Opera for tablets will have plenty of places to deliver web content, as we’re expecting a glut of Android tablets to show up at CES. Along with the high-profile devices from Motorola and LG, Lenovo, Asus and Acer will also have the little, green robot on the larger form factor.

We didn’t even mention the BlackBerry PlayBook, which should also be able to use this new browser and you never know what Microsoft will unveil in the tablet area.

Keep an eye on Opera.com for more announcements and you should definitely be checking out our CES 2011 section for the latest news and bone up with our CES 2011 preview so you won’t be caught by surprise by all the gadget goodness.