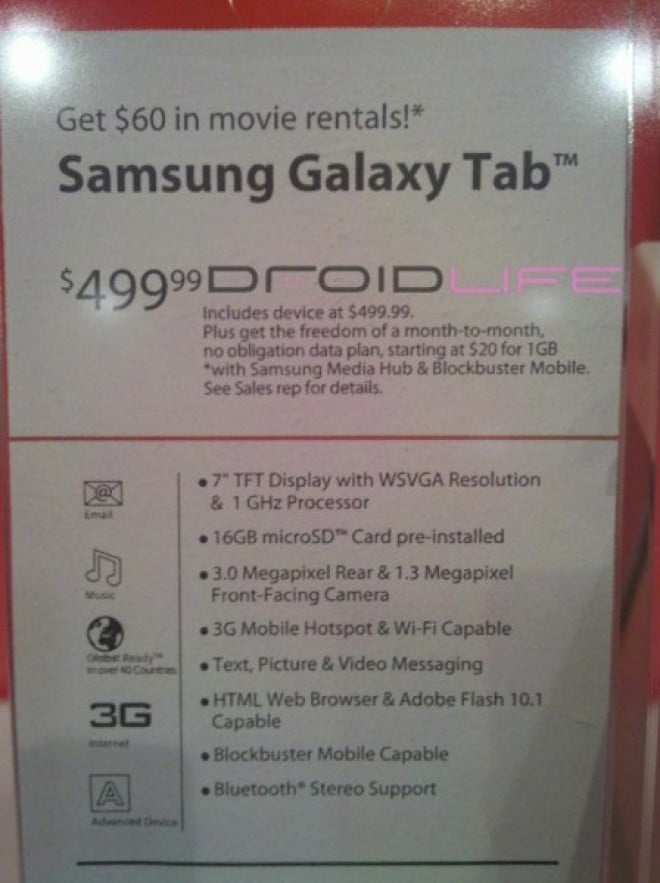 Samsung and Verizon want you to get a Galaxy Tab right now, regardless of what CES 2011 might have waiting in the wings. Recently, a new price for the Galaxy Tab has been popping up at some Big Red stores, bringing the Tab down to $499, and that’s not all.

With your $499 purchase, Verizon will be throwing in $60 worth of movie rentals through the Blockbuster application, or Samsung’s own Media Hub. Best of all, if you purchased the Galaxy Tab within the last 14 days with the higher price tag, you can go back to Verizon and grab a $100 refund. Even if you bought the thing at its original price recently, it’s nice to know you won’t be snubbed because of it. Then again, if you don’t mind a contract, you can grab the Sprint or T-Mobile version for only $399, so it depends on what you’re looking for.

Since we’re right around the corner from CES, I wouldn’t be surprised if we saw the Tab drop in price a little more.  The single core Hummingbird-powered tablet will start to look like old news after the introduction of multiple Android tablets sporting dual-core NVIDIA Tegra 2 silicon. The Hummingbird CPU just can’t compete the with the Tegra’s power.

But for what you get at the new price point, the Galaxy Tab from Verizon might just be the best bet for Android tablet fans. It’s good that Samsung banged out a tablet in such a short amount of time, but I can’t see it really running with the rest of the tablets after a majority of which will likely be announced at CES in a couple of days. Will Samsung introduce another Galaxy Tab? We don’t have much longer to find out what’s up their sleeves now.

Does the $100 price drop make you want the current Galaxy Tab, or will you still be waiting to see what comes of CES in the tablet space before you make a purchase?