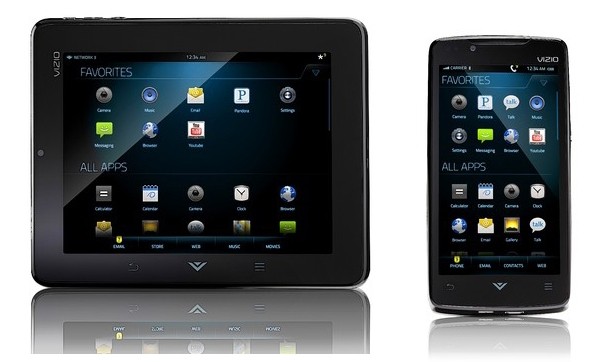 Making mobile phones used to be a monumentally difficult task. You had to know a lot about radios, component sourcing, have intimate embedded software skills, and it’s why the companies who dominated the mobile world before Google and Apple crashed the party were also the same companies who built mobile networks. Motorola, Nokia, the 800 pound gorillas were alone. Now thanks to hardware platforms like Qualcomm’s Snapdragon, companies can snatch up everything they need to build a smartphone from one company, slap Android on it, throw their brand name on the front of the device, and immediately start bringing their product to market. One such company attempting to expand their product offering is Vizio, who until now has been known for making cheap high definition televisions.

Matthew McRae, Chief Technology Officer of Vizio, recently spoke to the Wall Street Journal about two products that will most likely debut at CES this week. One is a smartphone that packs a 4 inch screen, 5 megapixel camera, and forward facing video chat enabled camera. The other is a tablet, 8 inch screen, also has a 5 megapixel camera, and it’s due out in the summer. Whether or not these devices will be awesome or just another slightly tweaked version of an Android powered device that’s desperately trying to differentiate itself from the sea of competitors is something we’ll have to wait and see. Engadget managed to find a picture of said two devices, and things don’t really look too good for Vizio.

Remember when brands partnered with mobile handset makers to make limited edition devices? They were the exact same handsets that were already out on the market, but came with a different coat of paint, custom ringtones, and a fancy background. Expect to see a similar type of thing happen over the next few years, but this time the brands will go straight to Asia and bypass the traditional players by engaging in discussions with people who actually build hardware.

Update: And the official press release has gone up. Added specs for both the tablet and the phone include: 1GHz processor, HDMI out, 802.11n WiFi. We still have no idea if the handset is GSM or CDMA, how big it is, how much it weighs, etc., and we’ve got even less info on the tablet, such as screen resolution.