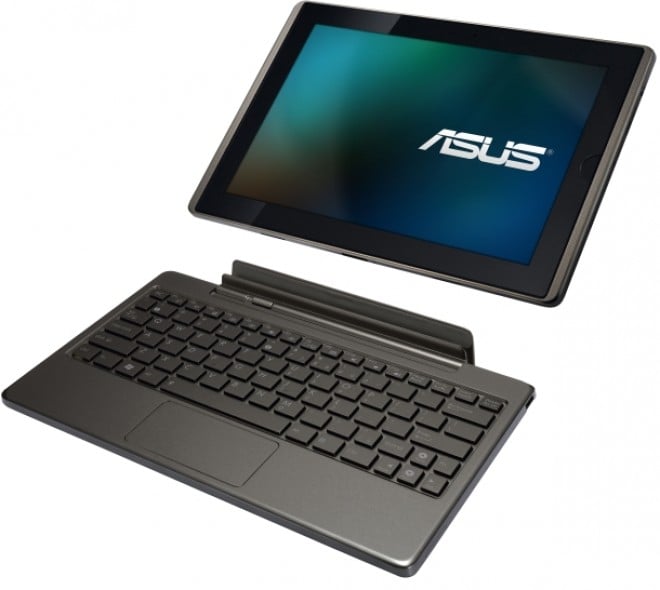 We knew Asus would be focusing on Android for sometime now, but it wasn’t until today that they let the cat out of the bag by announcing a handful of tablets, most of which are running Android 3.0 Honeycomb. The ASUS Eee Transformer is one of these tablets, and it packs a punch by allowing a user to attach a keyboard dock at will.

The 10.1 inch tablet may ship with Android’s newest software version, Honeycomb, but it’s been skinned by MyWave. MyWave is nothing more than a UI layer on top of Android, which as you may know, can slow future updates down. But, seeing as how most of the world doesn’t yet have Honeycomb available to them, it still may be worth it, even to all you stock Android enthusiasts out there.

The stand out feature of the Transformer is that you can attach a separate keyboard dock, thus transforming the device into a netbook of sorts. Android may not be the best platform to service the netbook arena, but we’re seriously debating whether or not this implementation is pure gold or not. It may not be the most functional netbook, but an optional keyboard is a good thing in our book.

As you may have expected, the Transformer will ship with the NVIDIA Tegra 2 dual core CPU, making it an elitist in terms of processing power. We’ve seen benchmarks (plenty of them) to know that the Tegra 2 will be taking center stage in the tablet world. It’s fast, and doesn’t consume a lot of power, making it one of the best options for tablets. 2011 should be a great year for NVIDIA and Android.

The Transformer won’t be available until April this year, and it’ll run you around $399-$699 once it hits retail shelves. We’ve still got a lot left to see here at CES 2011, which has yet to even officially start, and it seems like these manufacturers just can’t wait to talk about their products. This is a good thing, and hopefully we’ll see the Transformer easily go toe to toe with the competition.

Continuing with the ASUS Eee Pad tablets announced today, the MeMO is perhaps the most portable one. The 7.1-inch tablet...