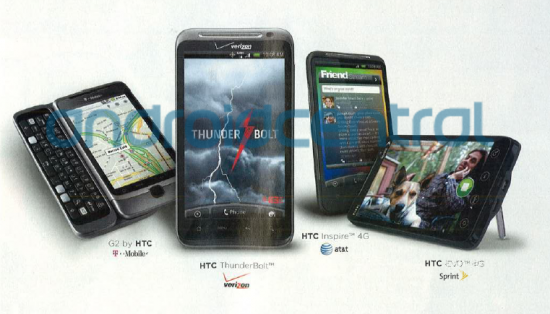 We all know that the HTC Thunderbolt is coming with some 4G LTE goodness, but a recent Rolling Stone ad also shows the Inspire 4G for AT&T. Wait, what?! If there were any doubts about AT&T’s own 4G efforts happening any time soon, this could alleviate those concerns. Unless, of course, AT&T plans on calling its somewhat evolved 3G network a “4G” one. Let’s hope that’s not the case.

Though we haven’t heard hard details about the Thunderbolt, we’ve seen plenty of leaks and rumors. The HTC Thunderbolt will be an Android handset, presumably with HTC Sense UI overlayed on it, and will also have the honor of being Verizon’s first 4G phone.

What’s a little surprising is seeing the Inspire for AT&T, or the Inspire 4G, more specifically. We all know that AT&T is also taking the LTE route for its 4G efforts, but it hasn’t really been clear on when it plans to do that. Until now, the carrier has been talking about improving and beefing up its current 3G network until it’s ready to go LTE. Is this ad hinting at something sooner? We’ll find out soon!

Verizon changing upgrade and warranty policies in preparation for the iPhone?

A tipster dropped us a note to alert of us some upcoming changes to Verizon's upgrade and warranty policies that...