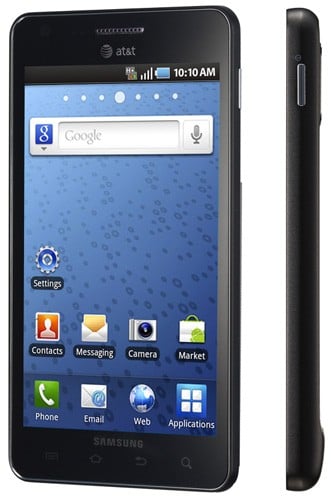 Samsung and AT&T announced a new Android handset of the nation’s number two wireless carrier. The Infuse 4G packs a whopping 4.5-inch Super AMOLED Plus display that boasts of a 50 percent jump in sub-pixel count which improves contrast and helps with outdoor readability. The high-end handset packs dual-cameras including an 8-megapixel shooter on the back and 1.2-megapixel sensor on the front for video conferencing. Under the hood, the Infuse 4G includes a 1.2 GHz single-core Hummingbird processor,which is fast but not as fast as the dual-core Optimus 2X from LG. Despite its large display, the Infuse 4G lays claim to being the slimmest smartphone to debut on AT&T and includes an unibody aluminum design. Somewhat disappointingly, it will launch with Android 2.2, not Android 2.3 Gingerbread. As with the other 4G devices announced by AT&T, the Infuse 4G includes an HTML5-compliant web browser. Though it includes 4G in its name, it boasts of HSPA+ connectivity and not LTE.  The Infuse 4G will be an AT&T exclusive and will be available in the 2nd quarter of 2011. Full press release from AT&T is on the second page.

The HTC Inspire 4G has been announced at AT&T's CES event today, running Android with the usual Sense customizations, though...