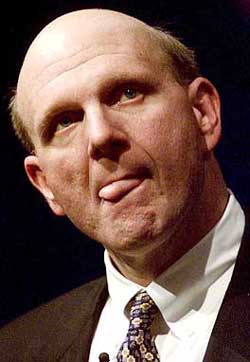 The Steve Ballmer keynote was actually kind of boring, primarily because everything we heard about Windows Phone 7 we had heard before. The software update is coming to enable copy and paste and improve performance and CDMA versions are coming by the first half of 2011.

The big news of the day from Microsoft came earlier, as it said that Windows would be coming to system-on-a-chip processors like ARM, just as we expected. We saw demonstrations of the next version of Windows running on Qualcomm SoCs and one from Tegra – these were just bare bones demos.

So, we can look for the next generation of Windows to work really well on mobile chips like the Tegra 2 or 3, which means it should work well on tablets of the future. The next version of Windows will have deeper touch integration built from the ground up, so the user interface should work better for these mobile devices and tablets.

The Microsoft tablet strategy is pretty solid, as Windows is still used by the majority of consumers and enterprises and those may want a similar experience on tablets. It also fits into the models that Microsoft is used to and one that has made it one of the most lucrative companies in the world.

Still, we can’t help but be disappointed by the Steve Ballmer keynote and the Microsoft tablet strategy. One wants the keynotes or major press conferences to be aspirational – no one can replicate the magic that comes from an Apple one but good products combined with a great vision can lead to some impressive stuff, just ask Motorola.

A lot of this tablet strategy hedges on the development of the next version of Windows and I find it tough to believe that it can be everything to all users – designing for the keyboard set and the full touch interface is a horse of a different color. Some may say that the problem for Windows on a tablet is a user interface one that could be fixed with clever Silverlight designers. I’m not so sure about that because it’s a user interaction issue with Windows on tablets and I don’t know if that can be licked by the next version.