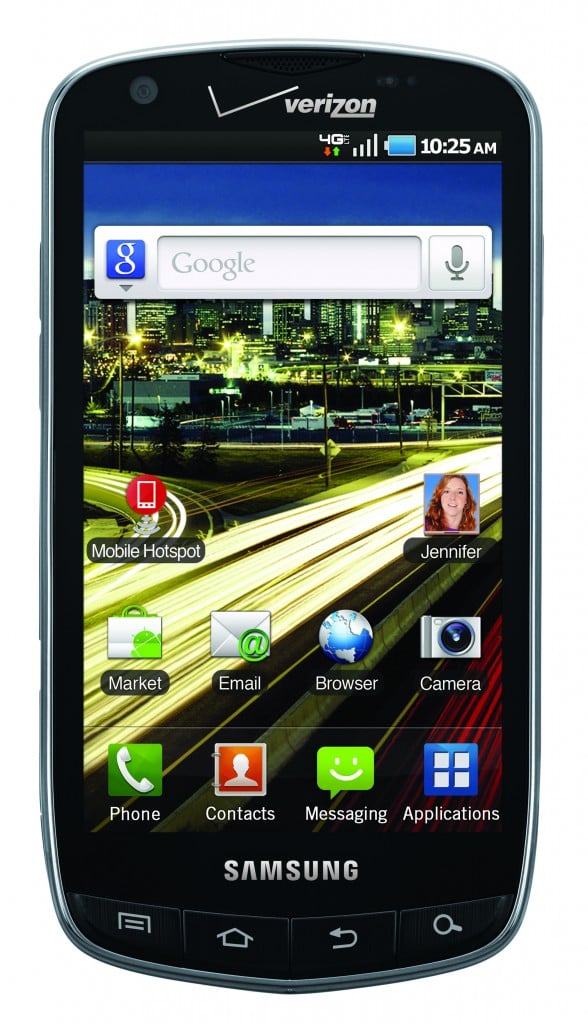 Verizon and Samsung announced in their CES press conference today a handful of devices, including a one referred to as simply a 4G LTE smartphone. A little bland in the naming department, but maybe the specs will impress you.
Besides obviously being compatible with Verizon’s burgeoning LTE network, the Samsung 4G smartphone runs Android 2.2, has a 4.3-inch Super AMOLED Plus display, 1GHz processor, 8 megapixel camera with flash, plus 1.3 megapixel secondary camera on the front for video chat. It comes preloaded with the Swype custom keyboard,  along with Samsung’s Media Hub service.

No mention of pricing or availability, but that seems par for course this CES. Hands-on video coming soon, but in the meantime, the press release is after the jump.

“The Samsung 4G LTE smartphone is an ideal option for those who look to Samsung Mobile for sleek and innovative devices combined with blazing fast speeds of Android 2.2 on the nation’s most advanced 4G network,” said Marni Walden, vice president and chief marketing officer for Verizon Wireless.  “This powerful combination enables our customers to connect face to face with family and friends, while still enjoying premium multimedia and social networking features backed by the Verizon Wireless 4G LTE Mobile Broadband network.”

The 4G LTE smartphone has access to Samsung’s Media Hub content service available on the 4G LTE network, which offers a robust collection of premium movies and TV episodes from some of the biggest entertainment companies for purchase and rental. Users can stay connected with Samsung’s Social Hub, built around messaging, contacts and calendar sync, which allows users to send and receive information, whether it is e-mail, social network updates or text messages.

Verizon Wireless kicked off CES with a press event filled with 4G devices and LTE-enabled software. The nation's number one...