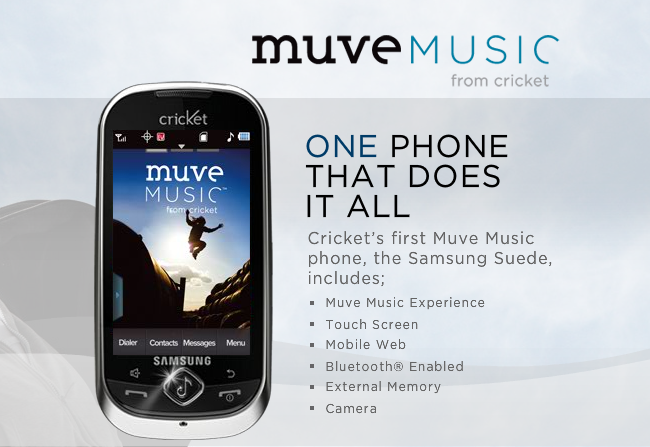 To be honest with you, I wasn’t too jazzed up to meet up with Cricket Wireless to discuss its Muve Music service because I don’t even get its service where I live and I don’t even consider devices that aren’t smartphones. After taking a look at the Samsung Suede with this service, I’ve changed my tune a bit (see what I did there?)

Cricket Muve Music is the first service from a wireless carrier which gives you unlimited music downloads, ringtones and ringbacks as part of a monthly package which costs $55. This also includes unlimited calls, texting and 3G data and it’s only applicable with feature phones at the moment but the company promises that Cricket Muve Music will hit its Android and BlackBerry devices in the future.

With a few clicks, Cricket Muve Music lets you download unlimited tracks to your mobile device. The company is using its own codec to send the file over, so it only takes up about megabyte of space on the device while still offering “CD quality” sound. Hardcore audiophiles may take some umbrage with this but what I heard sounded pretty darn good.

The song downloads don’t have DRM on them but they are protected to stay only on the device. The company says that this is a distinct difference because DRM generally requires an online check with servers, which could lead to stutters in the music.

What impresses me is that Cricket was able to get millions of tracks from all four major record labels because those companies are generally tough to negotiate with (just ask Spotify). The Muve Music service took 2 years of tough negotiations to come through.

The Muve Music service also comes with an integrated media player which I think is quite intuitive because it’s simple to download tracks, cut that track into a ringtone, search and discover tracks and more. This also includes a customized version of Shazam which has an easy option to download tracks it identifies.

If you’re the type that wants eight cores in your super duper phone, the Muve Music service probably won’t be a killer feature to get you to switch over to Cricket. But if you just want a reasonably priced phone with tons of great tunes, it looks like a solid option.

If you're a fan of streaming radio, you've probably already tried Slacker Radio. Perhaps you might even be a subscriber...