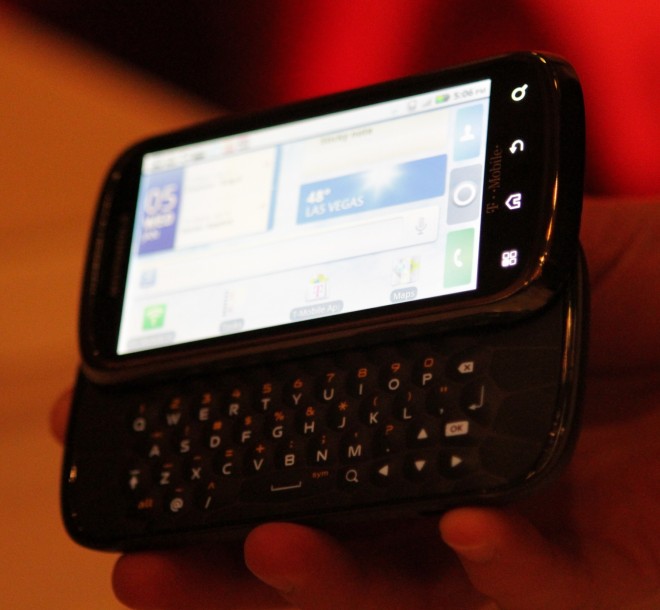 Yesterday we saw the Cliq 2 officially announce and we got some hands on time with the Motoblur device.  The redesigned keyboard boasts a better typing experience – the obvious stand-out feature out of all of the upgrades from its predecessor. But will a new keyboard and some beefier specs be what the Cliq 2 needs to be a winner? Read on to find out!

The Cliq 2 has seen some rather impressive upgrades from the original – it now boasts a 1GHz CPU, 3.7 inch display, 5 megapixel camera with dual – LED flash, HSPA+ support, and Android 2.2 Froyo, making it a worthy successor to the original Cliq. But even with specs that are on par with the likes of the Droid 2, will the fact that the handset is skinned with MotoBlur turn some people off to the device?

The Cliq 2 is covered in plastic, but you wouldn’t necessarily notice much after having it in your hands for a while. From our short time spent with it, the device seems solid in all the right places. However, the keyboard is the most dramatic change, and by just looking at the device, you might think that the typing experience would be horrible, but that’s just not the case. The keyboard is comfortable to use, and the keys are bubbled to help you know what key you’re hitting. While it’s much better than the original Cliq’s, I do wish the keyboard was a bit bigger, but that’s a small gripe I would get past in due time. The keyboard has a solid, reassuring click when you slide it up, so you know it won’t be falling back down if you hold in the wrong direction unlike some other T-Mobile phones.

The 1GHz CPU on the Cliq 2 ensures a fast experience, and I had no lag whatsoever. Even with the rather ugly Motoblur UI won’t slow this bad boy down, but that may change after prolonged use. Motoblur has seen some nice upgrades with its transition effects and other small things that refine the experience, but at the end of the day, it’s still Motoblur. One of the new additions of Motoblur is that you can change between home and work modes with  a couple of clicks. This is pretty much exactly the same as HTC Sense‘s Scenes, and while it’s something many will likely forget to use, it’s a great option to have.

So, the Cliq 2 may not be running with the Droid Bionic, but it’s still a solid device that those who enjoyed the original device will love. How it will fare overall obviously remains to be seen, but the device launches Janurary 19, 2011.