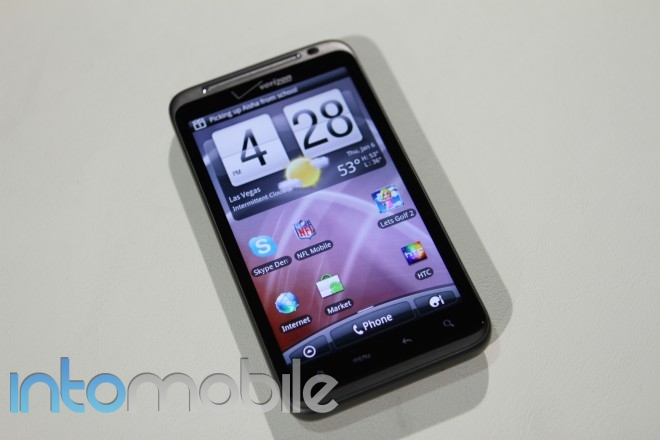 Verizon announced one of its newest 4G LTE smartphones at CES 2011 yesterday – the HTC Thunderbolt. The latest Android 2.2 handset for Big Red sports a 4.3-inch touchscreen display, a 1GHz Qualcomm processor and a kickstand behind it – sort of like the EVO – that opens up to reveal another speaker. We came away pretty impressed with the new HTC handset, although we had always hoped for just a little more (Gingerbread and dual-core Tegra 2 processor).

The HTC Thunderbolt is no slouch. The in-hand feel is great – although the screen is rather big, the device itself isn’t too large or cumbersome. We didn’t have an EVO on hand to compare it with, but it felt smaller all around despite the exact same screen sizes. It’s also dressed in HTC’s soft-touch coating, so there is nothing plasticky or cheap-feeling about it, which is what we’ve come to expect from the Taiwanese manufacturer.

What’s really cool about the Thunderbolt, besides being one of the first devices with Verizon’s 4G LTE compatible antennas on board, is that Skype is integrated right within HTC’s Sense UI. Additionally, there is 8GB of on-board storage, which is roomy, but it comes preloaded with a 32GB microSD card.

While we’ve only had a very brief amount of time with the Thunderbolt, it made a good first impression with us so far. HTC Incredible owners who have grown accustomed to Sense UI will absolutely love this phone as an upgrade.

Overall, the HTC Thunderbolt looks to be a promising addition to Verizon’s line-up of smartphones this year. Between the Droid Bionic by Motorola, the LG Revolution, Samsung 4G LTE and the Thunderbolt, I’d have to say the latter is my favorite. Of course, I’m a bigger fan of Sense UI than Motorola’s Blur interface, but the device feel and overall look is very appealing.

No word on pricing and availability just yet, but we’ll sure to keep you updated as info comes our way.

Check out our hands on video and photo gallery below for a quick hardware and software tour of the device!

Yesterday we saw the Cliq 2 officially announce and we got some hands on time with the Motoblur device.  The...