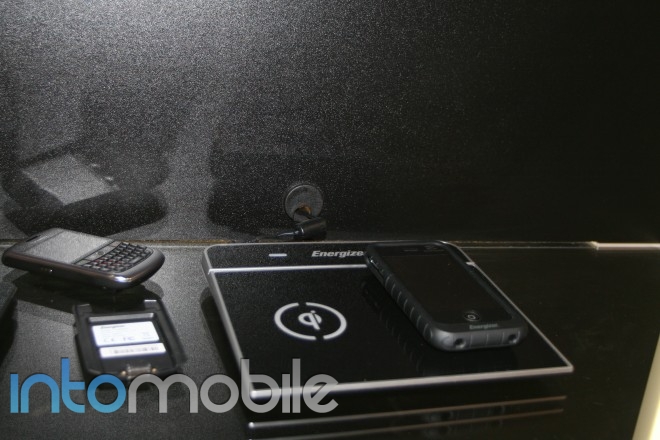 We’ve all wanted wireless charging to be as quick, easy and effective but there have just been too many disconnects. Sure PowerMat works pretty well but you still have to buy a new case for your device. Fulton Innovation Qi walked us through its wireless power demo at CES 2011 and we’re very excited about it.

The Qi wireless charging standard was established about six months ago and we’re already seeing real live products with it built it. The just-announced LG Revolution with Verizon 4G LTE has the Qi wireless power standard built in, so you can just toss it on a specific pad and get charging.

The company said the Qi wireless power technology can deliver about 75% the charging rate of standard plugged-in chargers, which isn’t too bad if you’re like me and plug your device in overnight anyways. The cool thing about the Qi wireless charging technology is that it can be integrated into work surfaces like desks or tables relatively cheaply and it will turn these into charging stations. We saw a standard office table rigged with about $100 worth of equipment and it could charge smartphones, laptops and any other device with the technology built in.

The company is teaming with TI to deliver the power coils and chips that are needed for the Qi wireless charging technology and it is currently placed on the back cover of smartphones. There will also be after market cases for things like the iPhone and BlackBerry to make it compatible.

The only issue I see right now is that it does add a little bulk to the phone, as this (and the larger LTE module) are probably why the LG Revolution is quite a porker. Still, that’s just a design issue that should be overcome once manufacturers become more familiar with the Qi wireless power technology.

The Motorola Xoom will take the world by storm in the next couple of months for Verizon, but it's WiFi-only...