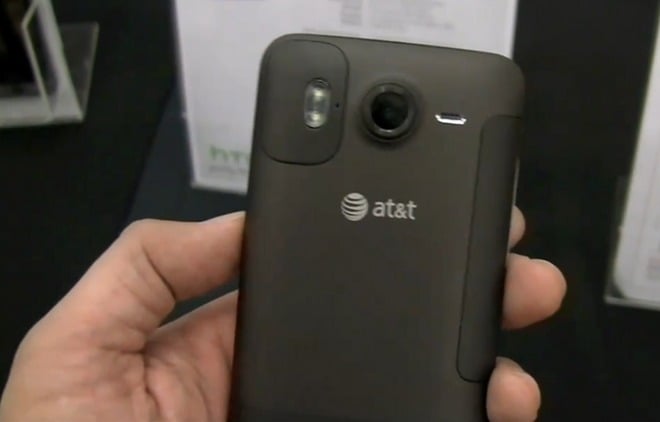 We got a quick hands on of the HTC Inspire 4G at this year’s CES, and all we can really say is the hardware seems solid. Of course, if you’re already familiar with HTC’s style and hardware, then it shouldn’t come as much of a surprise to you. The phone is solid, thin and has a nice soft-touch texture, and it has that this-feels-expensive weight to it. It looks much like the Desire HD, so if you’ve seen or handled the device before, you’ll feel right at home with the Inspire 4G.

Unfortunately, because the software on the phone wasn’t final, we didn’t get to fire it up to take a look at it. The software, however, is the first that’s completely integrated with HTCSense.com and allows you to remote locate and wipe the device.

The Inspire 4G is coming to AT&T and will be compatible with its HSPA+ “4G” network, so expect some speedy data connectivity where available. Although it is a bit of a bummer that it’s not sporting the new dual-core Tegra 2 processors by NVIDIA that we’ve been seeing on other smartphones and tablets at CES, but the 1GHz processor on board should do just fine. It also has an 8MP camera on back and a front-facing camera for video chat.

The video below shows only the HTC Inspire 4G hardware since we weren’t allowed to power on the device, but what you’re seeing is the actual hardware and not just some dummy phone. Again, it’s a nice device but nothing extraordinary or inspiring – despite its name – but it’s definitely a good addition to AT&T’s Android and smartphone portfolio – especially since it might be losing iPhone exclusivity this coming Tuesday to Verizon.

No solid figures on pricing or availability, but we do know it’s coming during Q1 2011. I’d guess it’s landing at around $199.99 with a two-year contract like most other smartphones of its kind.

While at CES 2011, we were able to get our hands on the Sharp Galapagos tablets and these may eventually...