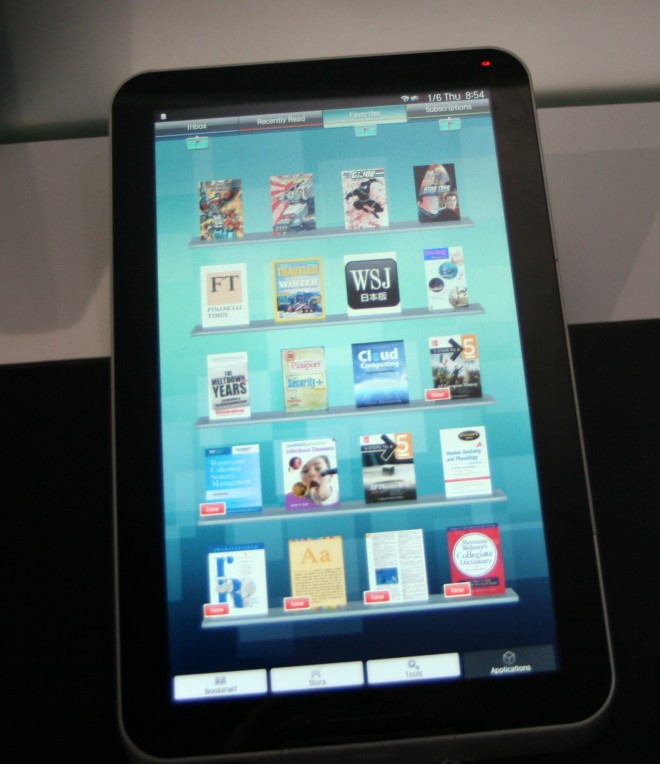 While at CES 2011, we were able to get our hands on the Sharp Galapagos tablets and these may eventually hit the U.S. market with the Android operating system. For now, the devices are going to be Japan-only and run a customized Linux OS, so is it any good?

The Sharp Galapagos tablets came in two form factors: a 5.5-inch version and a 10.8-inch version. The company would not really dive into the full specs of the devices but we expect the Sharp Galapagos tablets to be competitive with what’s on the market when it lands, so that means it should have a decent processor, WiFi, it’s 3G capable and Bluetooth.

The industrial design of the Sharp Galapagos tablets didn’t blow me away. The larger version was wonderfully light but the overall feel of the device wasn’t high end. The 5.5-inch version reminds me of the Dell Streak but without the personality.

The software was a proprietary Linux OS that had some neat flourishes like a rotating 3D cube UI for certain sections. It was all in Japanese though, so I couldn’t really dive all the way through it. We saw the e-reader functionality and it looks serviceable but not noticeably better than things like the Kindle software or the Kobo reader.

The company said it plans to launch the Sharp Galapagos tablets in Japan first and it may come to the United States later this year with Android. While I like new competitors in the space, it may be tough for this to stand out from the crowded Android tablet market.

At least Sharp is leveraging it’s other brands, as it also showed off a content-sharing prototype which lets you have a movie, magazine or other content start on your tablet and then be pushed to to your Aquos TV or smartphone over WiFi. If it sounds similar to AirPlay or DLNA, that’s because it is. I would prefer that the companies adhere to one standard so consumers would have more choices and capabilities but Sharp’s system did work as it promised.

Sony Ericsson’s Xperia Arc to launch in Indonesia in 3 months?

The US may not be getting the the Sony Ericsson Xperia Arc anytime soon, but according to the picture above,...