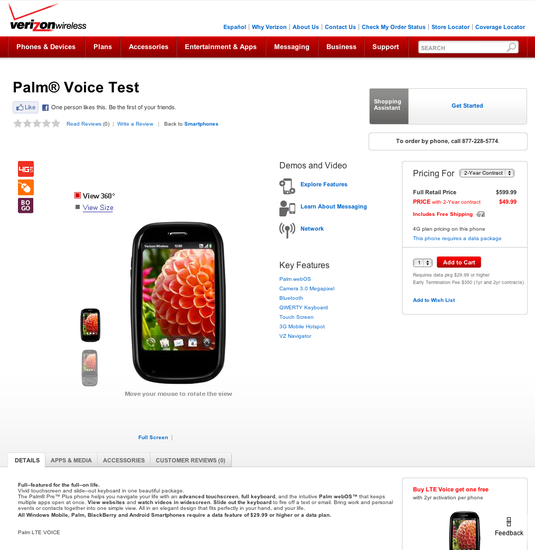 A 4G LTE version of a Palm webOS handset may have been accidentally outed by Verizon Wireless. Verizon has a staging website, testman.verizonwireless.com, that the carrier uses to test website updates. The changes that appear on this website are usually minor and include such features as handset reviews which appeared on the testman website a week or so before that feature hit the official verzionwireless.com website. Sometimes, though, Big Red accidentally outs handset details like it did with the BlackBerry Storm and the DROID Pro.

This time around a Palm handset with the title of Palm Voice Test and LTE Voice has made its debut on this testman website. The placeholder page shows a picture of the now discontinued Palm Pre Plus and the relevant specs for this handset. The only difference is the new title-ing and the addition of an LTE icon to the handset’s most important features.

So what this does mean? Well, it could mean that HP/Palm is planning to unveil a 4G LTE handset for Verizon when it announces its new smartphone lineup on February 9th. Palm is expected to unveil five or six devices in the next month and one of those may be LTE-friendly. The handset manufacturer desperately  needs to get its next generation handsets on carriers, especially Verizon which is the largest carrier in the U.S. Currently, Verizon only offers the Pixi Plus. The Pre Plus  has been discontinued and the Pre 2 has yet to materialize.

Of course, this listing may also be a placeholder for some other website feature or another 4G handset that will debut on Verizon. Only time will tell if a 4G handset will come out of the R&D labs of HP and Palm. If a 4G-enabled webOS handset did land on VZW, will it be able to compete to the rumored, upcoming Verizon iPhone?

It's all but guaranteed that the Verizon iPhone will be unveiled tomorrow during a press event in New York and...