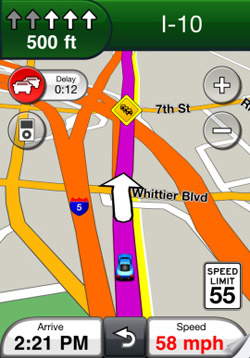 Garmin used to be a pioneer in embracing mobile technology. Then something happened and everything stopped, releasing no smartphone apps for quite some time. To be fair, they did try to partner with Asus but that venture turned into a flop. Now they’re kicking back with a dedicated iPhone app called StreetPilot to fight the likes of TomTom, Magellan and Navigon.

The application comes with the familiar Nuvi interface, sporting turn-by-turn directions with text-to-speech spoken street names and graphic lane guidance. In addition, there are free traffic alerts, integration with built-in Contacts, ability to play your own tunes while driving and multi-tasking support, allowing you to take phone calls while the app works in the background. The Garmin StreetPilot app is available in the AppStore for $39.99.

And that’s not all. Garmin also unveiled a trio of non-GPS apps for iPhone and Android devices:

iPhone apps are linked below, whereas Android users will have to search for “garmin” in the Android Market and take it from there.

Hauppauge Digital announced a new product for the TV addicted iPhone, iPod Touch and iPad users. The so called "Broadway"...