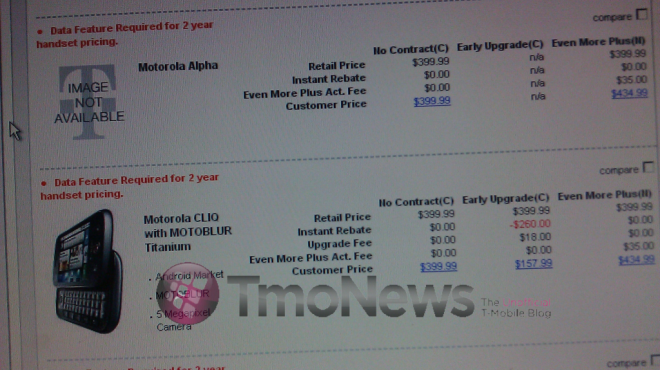 We know that the Cliq 2 is indeed on its way and will officially launch on the 19th of the month. We’d initially thought this device to be codenamed the Motorola Begonia, but according to new leaks the Cliq 2 may have been renamed to “Alpha”. Is the Motorola Alpha the new name for the Cliq 2, or are we dealing with a completely different device?

We’ve seen code names changed up before, but the fact that the Cliq 2 has already been announced, and that we have an official release date , makes this codename change somewhat questionable. Who knows, maybe this is yet another Motoblur-toting Android phone from Motorola, but we’d honestly be surprised if this was anything other than the Cliq 2 at this point. The Cliq 2, despite its completely different physical design, is technically the Motoblur version of the Droid 2. The specs are virtually identical, but the addition of Motoblur makes it a bit hard to take the device seriously.

We got some hands-on with the device, and walked away pretty impressed. The Cliq 2 is a solid device that is a great update from its predecessor, but we wish we could see something like the Droid X hit T-Mobile at some point in the future. If the Alpha is a different device, maybe this is that device? Likely not, as Motorola would have probably announced the alpha alongside the Cliq 2. Still, we can’t be positive, but we’re still just going to assume that the Alpha is the Cliq 2 until proven otherwise.

So if we keep seeing the Alpha name floating around after January 19th, then we may actually have a different device on our hands. Until then, we’re just going to wait until we get the device in our hands and go from there. I think one Motoblur device is enough for one quarter.

What is your take on the Motorola Alpha? Cliq 2 or something else?

Google Translate for Android is just about to hit its one-year birthday and the search giant has just released a...