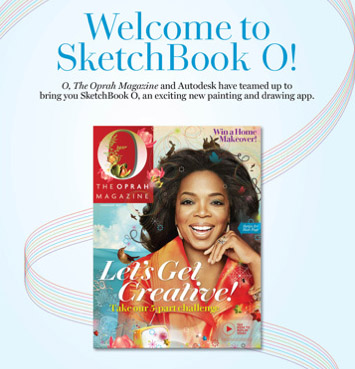 O, The Oprah Magazine is teaming-up with Autodesk to launch the SketchBook O App for iPad, a painting and drawing app created specifically for O readers. Based on Autodesk’s SketchBook Pro, the new application is released in conjunction with the magazine’s February “Creativity” issue.

The mentioned issue of the magazine comes with the special challenge, which is described below (from the press release):

SketchBook O is at the heart of the magazine’s first Creativity Challenge. Writer and filmmaker Miranda July developed five fanciful “prompts” for the issue, designed to spark imagination. All of the exercises are designed to be documented, with completed works sent to oprah.com to be shared in a Creativity gallery. For the assignment, “Draw Their Hair,” readers are invited to use SketchBook O to create a digital drawing on an iPad. Users can import the drawing to their photo library or send it directly to oprah.com/creativity. The assignment is elegant in its simplicity: think of the people who affected you in the past year, whether they enraged you, made you feel lustful, brought out your tenderness, etc., use the app to draw their hair, and caption the result with the feeling elicited by the person.

SketchBook O will be live for the duration of the Creativity Challenge, from January 11 to March 11, 2011. It is available as a free download and you can grab it from a link below.

You know the drill - there so many apps in Apple's AppStore and developers are having hard time making their...