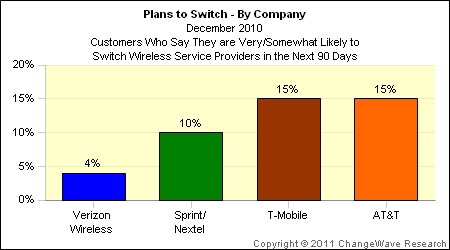 Earlier this week the Verizon iPhone was finally announced and it was seen as an even bigger savior than when the smartphone was first announced. Suddenly Apple and iPhone lovers were able to breathe – they had a way out of AT&T’s grasp. The promise of being able to make phone calls and use data on the iPhone seemed real. With all this talk about a working iPhone, however, just how many AT&T subscribers are going to make the switch?

According to a recent ChangeWave survey, approximately 15% of 4,050 respondents said they’d switch to Verizon for the Apple smartphone. Sprint subscribers made up 10% and T-Mobile comprised 15% of the total respondents that said they would leave their carrier for Big Red. 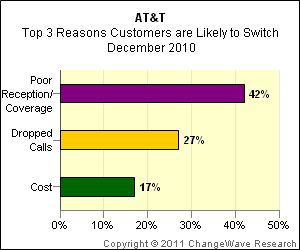 It’s no surprise why many AT&T customers are leaving — weak reception and dropped calls. In bigger cities like San Francisco and New York, or areas with dense populations – Los Angeles is a big city but not nearly as dense, so AT&T isn’t that bad – more iPhone customers are wanting to switch to Verizon.

In a survey conducted in December, prior to the official announcement of the Verizon iPhone, ChangeWave concluded:

A total of 16% of AT&T subscribers say they’ll switch to Verizon once it begins offering the iPhone. Another 23% say they don’t know if they’ll switch.

Importantly, current Apple iPhone owners are the most likely group of all to switch, with more than one-in-four (26%) saying they’ll leave AT&T for Verizon.

I’d hardly call this a “mass exodus” as many are predicting, but it’s certainly going to have a tremendous impact on AT&T and other carriers. Again, those likely to switch are iPhone users in areas where AT&T’s coverage is bad. However, and this is anecdotal and based on personal experiences, Apple smartphone customers who have no issues with AT&T – like myself and my family (in Brooklyn and L.A., respectively) – don’t really care to switch. The cost of cancellation fees coupled with the loss of perks like rollover minutes don’t add up.

Are you going to switch to Verizon when the popular Apple smartphone becomes available? Take our survey here.

RIM's getting ready to refresh the BlackBerry Torch 9800, by the looks of it. The next Torch looks an awful...