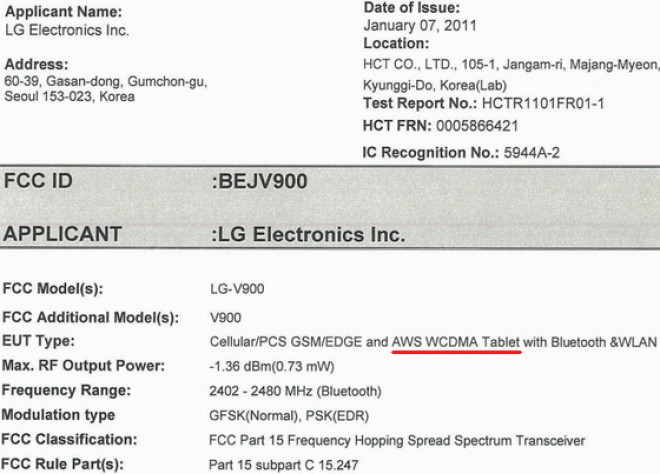 The second major Honeycomb tablet, the T-Mobile G-Slate by LG has just hit the FCC, and its about darn time. OK, fine, maybe it hasn’t been that long, but this is certainly good news for Magenta customers hoping for an Android Honeycomb tablet of their own.

The LG G-Slate is one of the two Honeycomb tablets that were announced alongside a carrier agreement. The G-Slate will be one of the higher-end tablet to run Android 3.0, as we know there will be plenty of mid-range Android 3.0 tablets hitting carriers later down the road, like the Identity 301. The device is named the LG V900 in the FCC filing, and sports T-Mo’s AWS bands, so there’s little doubt that this guy is the G-Slate.

While the Motorola Xoom – the tablet that stole the CES show, can be upgraded to Verizon’s 4G LTE network, the G-Slate will ship with T-Mobile HSPA+ support right out of the box, giving it a slight edge over the Xoom in terms of connectivity – at least from the get-go. That said, we’ve yet to see this tablet in the flesh plastic, but we’re hoping LG took extra care with the hardware on this device, and that build quality will be just as good as the Motorola Xoom.

The G-Slate, along with the Xoom will be the first real Honeycomb tablets to hit the market. Honeycomb, or Android 3.0 was built for larger screens in mind, most notably tablets. The new version of the OS brings a complete UI overhaul, and from what we’ve seen, it’s glorious. Most applications have been reworked to take advantage of the larger screen real estate, and many have been a 3D sexifying. While we’re sure that custom UI’s for Android are far from dead, the G-Slate and Xoom will likely ship with stock Android. From the looks of it, Honeycomb shouldn’t be covered up in any way, even if I’d like to see a HTC Sense tablet some day.

So, T-Mobile customers, will you be grabbing the G-Slate once it hits the shelves?