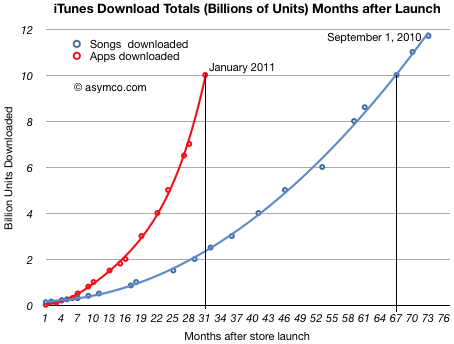 There was a time when apps were considered to be a fad by those companies too short-sighted to get ahead in the game, but with the steep and rapid proliferation of apps in the iTunes App Store, it looks like Apple had it right. Last week we heard that the iTunes App Store was nearing its 10 billionth download, and that translates to just about 60 apps downloaded for every single iOS device – iPod touch, iPhone and iPad – sold.

Here is what’s really impressive about the rate of downloads according to Asymco:

The amazing story of this chart is not that apps are running at above 30 million download per day, but that the figure is growing. Growth like this is hard to get one’s mind around. Not only are downloads increasing, but the rate of increase is increasing.

iOS device sales are steadily increasing, but it seems that the rate at which we’re downloading apps is growing exponentially. In a comparison made with the fall of 2008, shortly after the App Store was made available for the iPhone and iPod touch, Apple saw approximately 10 apps downloaded per device. Just a little over two years later, we’re seeing over five times that number.

With Android Market growing and Windows Phone 7 launching with thousands of apps available, it’s no surprise that the American Dialect Society chose the word “app” as word of the year for 2010. Very appropriate.

The iPad was a mighty hot commodity when it was released, and it enjoyed great reviews until the iPhone 4...