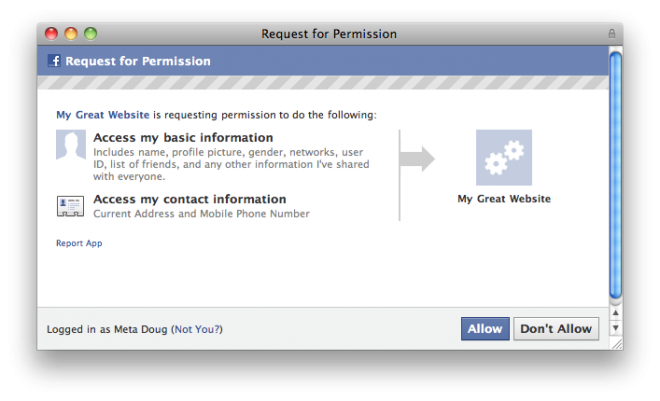 That Facebook sure doesn’t mind stirring the pot when it comes to privacy concerns. The world’s largest social network has just enabled tools which lets app makers get access to your address and phone number if you grant them permission.

I think the last part of that statement is key, as the move will allow Facebook app makers like Zynga to get your phone number and address if you grant it permission. Why is this being done?

“We want to make it easy for people to take the information they’ve entered into Facebook with them across the web. This new permission gives people the ability to control and share their mobile phone number and address with the websites and apps they want to use,” a Facebook spokesman told FoxNews.com.

This sort of makes sense, as the world’s largest social network really sees mobile as the future but you’d also be wise to remember that the more demographic data Facebook gets, the more valuable it becomes to advertisers and app makers. When you combine your address and phone number with the wealth of other data it already knows about you, these social apps could be a gold mine for advertisers.

What are the benefits of this for end users? Well, it’s tough to say on the surface but I suppose your address and location could be used for some sort of location-based game that lets you battle it out with super close people. More likely, this demographic information will make your data more valuable to app makers, which could eventually lead to better funded apps (at the expense of your privacy, some would say).

Still, the bottom line is that you still have to agree to it for app makers to get this type of access, so read those pages carefully. What do you think?

Google is looking to beef up its NFC team as the search giant plans to put a major focus on...