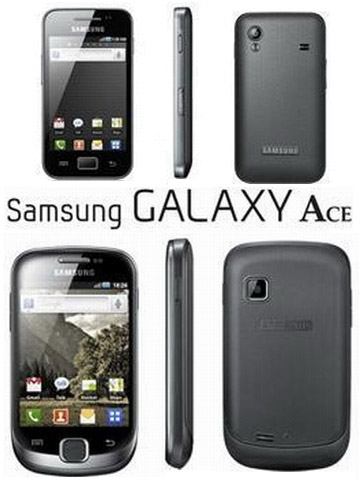 Few days ago we’ve seen the Samsung Galaxy S Mini (S5830) in the wild. Today we’ve found out that’s not actually the name of the phone – its name is Samsung Galaxy Ace. As we said in our earlier post, it is a mid-range device with a 5-megapixel camera, HVGA (320×480 pixels) touchscreen, WiFi, Bluetooth 3.0 and I presume other “standard for an Android device goodies” like GPS, HSPA connectivity and an array of sensors.

In addition, we’ve spotted another “still not officially announced” Samsung smartphone – Galaxy Suit S5670. Unfortunately, we’ve no idea what’s this baby all about but judging by the model number, we’re most likely talking about an entry-level Android device.

It is said that both phones will be launched during the Mobile World Congress in Barcelona, which starts within about three weeks. As the world’s second-largest mobile phone maker, we’ll definitely be giving Samsung the space it deserves on IntoMobile, covering all of the company latest and coolest products. Stay tuned…

AppsGeyser allows webmasters to create Android apps from their websites

There's a new mobile-izer service on the Interwebs called AppsGeyser, which allows webmasters and online businesses to quickly create apps...