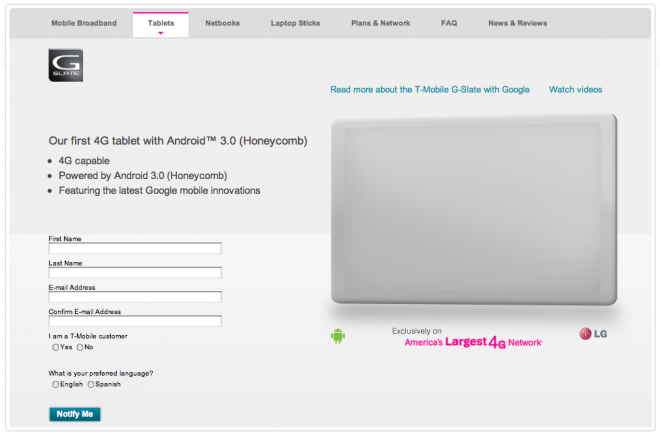 The only mention-worthy Android Honeycomb tablet that’s headed to the US and is not the Motorola Xoom has got to be the upcoming T-Mobile LG G-Slate. Made by LG, the G-Slate will be the first 4G Honeycomb tablet to become available, and Magenta just put up an information page up for the device, in case you’ve been keeping an eye on this tablet.

Just as we saw with the initial T-Mobile G2 teaser site, the G-Slate sign up page gives you a simple silhouette of the device, devoid of any defined features. T-Mobile likes to keep their G-series devices under wraps until they’re good and ready to be revealed to the world. Other devices, like the Dell Streak 7, don’t need to be hidden since T-Mobile saves these kind of hype-building tactics for their flagship devices only. Besides, if you’re in the market for a tablet within the next few months, you’re likely not “getting a Dell.”

If you have yet to purchase some sort of tablet, and you’re looking for the top handful of tablets, then you’ll certainly find the G-Slate on the list. Our list of Top 5 tablets didn’t include some of the tablets we’re looking forward to, and if we were to redo the post, it would probably have to be a top 10 at this point, and the existing tablets on the list would be re-ordered significantly. Until that happens, we’ll have to pencil in the LG G-Slate and the just-announced Motorola Xoom.

Even though we’re still excited to see the iPad 2, Adam, and WebOS tablet, the G-Slate and Xoom have our attention more than anything else at the moment. Of the two, the G-Slate will ship with HSPA+ support out of the box, whereas the Xoom will need a hardware upgrade to get access to Verizon’s 4G LTE. You’re likely going to pay for that upgrade, too. So by default, Magenta’s tablet, even though we have yet to actually see the thing, is getting a big thumbs up from us.

If you’d like to stay up to date with the device, hit up the information page below!

We got to get our hand all over the LG Optimus 2X not too long ago, and now we're glad...