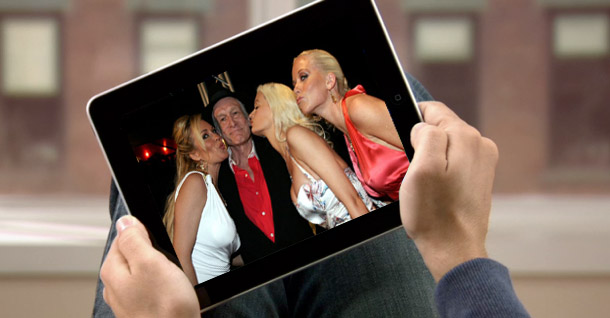 Don’t be surprised to see the Apple iPad winding up under a few mattresses, as Hugh Hefner said that the uncensored Playboy archives will be coming to the iPad soon. This could indicate a change in Apple’s developer stance.

There’s no word on when, exactly, we can expect uncensored Playboy on the iPad but I would imagine it won’t take too long. Perhaps this means that the upcoming iOS 4.3 will have different developer agreements, including the option to include adult content for those over a certain age.

For all the guff Apple has received over its draconian control of the App Store, it has done a lot to help mobile developers flourish. It has paid out over $1 billion in app revenues and the company has also slowly loosened up.

After almost a year of battling, Apple finally let the Google Voice iPhone app into its store, although some would argue that involved avoiding federal probing more than an actual shift in philosophy. Allowing the uncensored Playboy magazines on the iPad would be far more difficult to dismiss, though.

Heck, the uncensored Playboy magazine on the iPad could even be part of the upcoming subscription model that is poised to hit iOS devices. Is this exciting to anyone out there? As silly as this may sound, I actually do really enjoy the articles in this magazine, so I’ll definitely give it a go.

[Update] Well, it looks like Apple won’t be changing its prudish ways with the App Store, as the uncensored Playboy archive will be coming to the iPad via a customized website. Gizmodo says this will be a subscription service that you access through the browser that will be formatted for the 10-inch tablet.

iPad 2 won’t have retina display, will keep same as original

A lot of hype has been surrounding the iPad 2 and its rumored specs - namely that it will have...