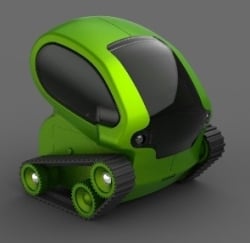 The Apple iPhone is great and all but it has had a severe lack of robotic tanks … until now, that is.

The TankBot is a small, robotic tank that can use an iPhone app to control it. It will supposedly use the accelerometer controls to direct the tank and it will even let you set it on autonomous mode.

This isn’t the first robot-control app we’ve seen on the iPhone and I don’t think it will be the last. The Parrot AR quadricopter has quickly become a must for all geeks and these things are actually pretty darn fun to play with.

At CES 2011, we also saw the Sphero robotic ball, which lets you control a ball with mobile apps. The cool thing about Sphero is that it will have an open API so developers will be able to create games for the little robot.

The TankBot robotic tank is expected to hit in June and it will only cost about $20. At that price, it seems like a great little toy or gift.

eBay has strong fourth quarter with mobile in mind

The fourth quarter for eBay was pretty decent with $2.5 billion and the company's mobile pushes are really starting to...