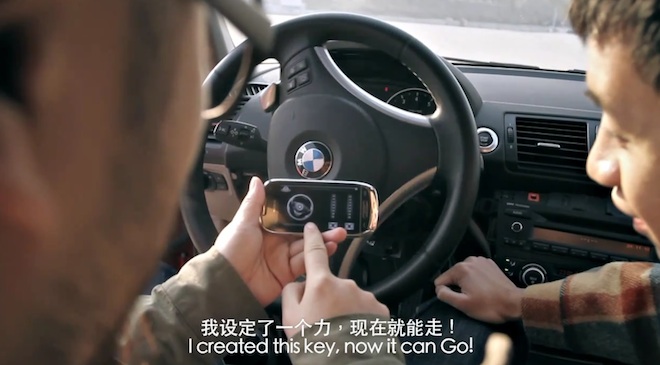 Viral videos are one of the best weapons in a marketing department’s arsenal, and Nokia went pretty big with this one. What you see below is a pair of Chinese guys, one of them is obviously a tinkerer, using the recently launched C7 to do several things using what is presumably the built in Bluetooth radio, but it’s when he takes control of a BMW that things start getting intense. Remember that James Bond film, where Pierce Brosnan is getting shot at while hiding in the back of 7 series? Back then he used a Nokia, a stunt driver, and a dedicated special effect team. Today this commercial is using a Nokia, and … that’s it!

Anyway, if you’re interested in picking up the C7, then here’s a bit of a backgrounder: it has a 3.5 inch OLED display with a resolution of 640 x 360 pixels, does quadband GSM/EDGE and pentaband 3G, meaning you’ll be able to get high speed internet access on this thing regardless of where you are on the world and which operator you use, Bluetooth 3.0, WiFi b/g/n, 8 GB of onboard memory, 8 megapixel camera, and the ability to capture 720p video. It’s basically a cheaper version of the flagship N8, minus the 12 megapixel camera, meaning this puppy is running the latest version of Symbian.

Is this video going to make you pick up a C7? Doubtful. Will it be an awesome way to make this Thursday go by faster and eventually bring a weekend of partying and attempting to pick up chicks closer to reality? Definitely. For what it’s worth, we recommend you don’t buy any smartphone just yet. Mobile World Congress is less than 5 weeks away, and that’s when all the top players are going to release their latest devices. Getting stuck with something that’s going to be outdate in barely a month is really sad and depressing if you’re a smartphone enthusiast.

[Thanks to Daniel for the news tip!]

Apple suing Nokia in the UK over touch screen scrolling [Cup of tea with that lawsuit?]

The whole Apple versus Nokia debacle is something we hate covering because at the end of the day it really...