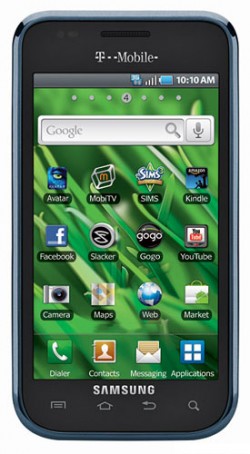 After rumors and leaks coming down the pipe for some time now, T-Mobile has officially announced their Samsung Vibrant successor, the Galaxy S 4G. So what’s this thing do that the original Vibrant can not? Well, for starters, the Galaxy S 4G supports Magenta’s 4G HSPA+ network. And, the handset ships with Android 2.2 Froyo on board.

The Galaxy S 4G will support T-Mobile’s HSPA+ network, and give theoretical speeds of 21 Mbps, but you’ll likely see something around 10 Mbps in real life. That’s a pretty fast pipeline for wireless data speeds, especially if the speeds are consistent, which they are. The only other feature that we know about is that the Galaxy S 4G will have Android 2.2 Froyo, but with the original Vibrant receiving the update in the near future, the only difference (that we know of so far) is that it’s an HSPA+ capable phone.

There’s still more to be announced about this device, as we still don’t know what size screen it’ll be sporting, but we know that it will be Samsung’s Super AMOLED display.

This newest addition to Magenta’s smartphone lineup will easily be the best handset to support the carrier’s HSPA+ network. With the G2 and the MyTouch 4G capable of 14.4Mbps, the new Samsung handset has a slight lead. While that’s all fine and dandy, after the issues with Sammy not updating their Galaxy S variants in the US, will this new device appeal to those in the know? Who knows how long it will take this thing to get Android 2.3 Gingerbread?

So T-Mobile users, the new Galaxy S 4G phone will soon be upon you, so begin saving your pennies, and cross your fingers that this handset will see regular updates.

The T-Mobile Samsung Vibrant, the carrier's own variant of the Samsung Galaxy S smartphone, will finally be getting Android 2.2...