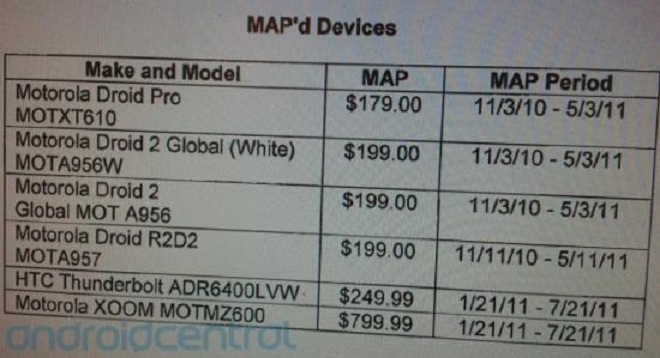 It looks like we can expect some great products from Verizon Wireless in the near future, as a new leak has the reported pricing for the HTC Thunderbolt 4G and the Motorola Xoom Android Honeycomb tablet.

The leak says the HTC Thunderbolt 4G will cost $249.99 and that will likely be with a subsidy and the included two-year contract. While that’s a higher initial cost than other devices like the Motorola Droid X, Verizon may be able to pull this off because it is a 4G device.

The HTC Thunderbolt 4G looks like it will be worth the extra cash up front, as it sports a 4.3-inch screen, 1 GHz Qualcomm processor, 8 GB of internal storage and up to 32 GB via the microSD slot. The most appealing aspect of this device will be the Verizon 4G LTE support, which should give users 6 to 8 Mbps download speeds on the go.

We don’t know know how much it will cost to get Verizon 4G LTE on smartphones but you can check out this video for an idea of what to expect from the HTC Thunderbolt 4G.

The leak also suggests that the lust-worthy Motorola Xoom Android Honeycomb tablet will cost $799.99. That’s a very steep price tag, so we’re assuming that will be the unsubsidized cost.

This is supposed to be the minimum advertised price but I’m hoping that the Motorola Xoom can hit the streets for less because that seems like a lot, no matter what type of specs it has. Just as importantly, the upcoming iPad 2 will likely start with an entry-level price point of $499.99, so Verizon is going to have a tough time convincing users to adopt this Android Honeycomb device.

What do you think, friends? Would you be willing to pay a few hundred dollars more for the Motorola Xoom than the entry-level iPad 2?

Samsung Gem coming to a CDMA carrier near you? [UPDATED]

When we first caught wind of the Samsung Gem, it looked to be destined for Verizon Wireless around September of...