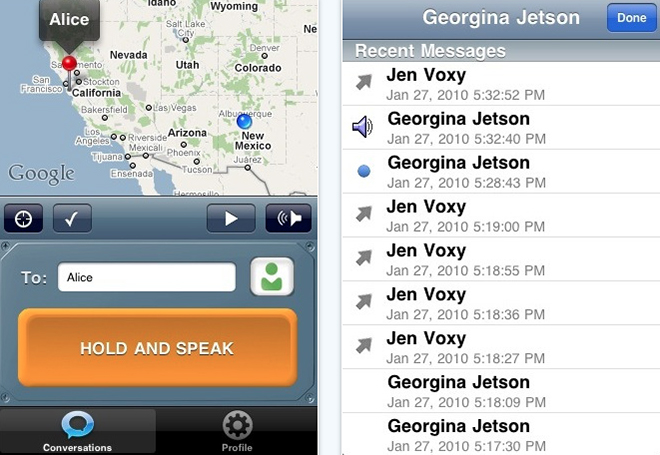 HeyTell is a walkie-talkie application developed for Android and iOS. The App was developed by Steven Hugg and Jen Harvey, a husband and wife team, that left their jobs to work on a voice-based application under the company name of Voxilate. Rather than select a voice or video chat tool like Skype or Tango, the pair decided to focus on a walkie-talkie application that lets people communicate in shorts bursts. Their motto is ” “push-to-talk, starting at $0.””

The application lets you send and receive messages in real-time and has a GPS component that, when turned on, can let others pinpoint your location. Likewise, you can see the location of your friends when they send messages with the map functionality enabled. The app ties into your contacts and let you communicate via phone number, email, or other piece of identifiable contact information that you enter into your profile.

So how successful is HeyTell? The service boasts of three million users since its launch less than a year ago. Users are reportedly sending 1.5 million messages a day at a rate as high as 35 messages a second. The company have the infrastructure to scale to 100 million users which suggests they are looking to grow Heytell well beyond its current state. The company is self-funded and generates revenue via in-application advertising and add-on purchases such as voice masking. Details on Voxilate’s financials were not revealed but the husband and wife team make enough to remain self-employed.

The HeyTell application is available for free from the Apple App Store and the AndroidMarket. Give its whirl and let us know what you think.

HTC Merge headed to Alltel instead of Verizon?

We were beginning to think we'd never hear of this handset again, but at long last, the HTC Merge has...