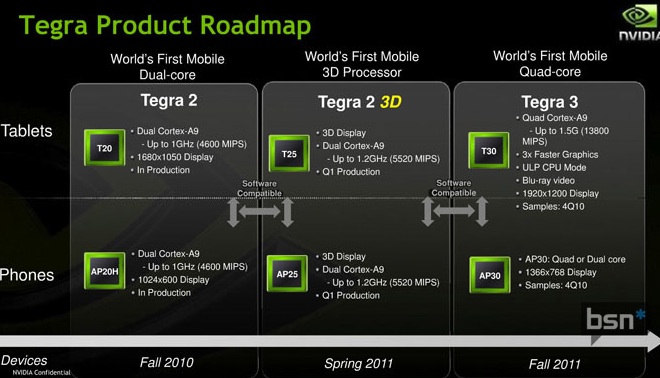 Yesterday we brought you news of NVIDIA’s upcoming Tegra 2 3D, which is nothing more than the Tegra 2 we all know and love, but with a slight increase in clock speed and support for 3D displays. We dismissed it as unexciting since 3D technology, whether it’s the type that requires 3D glasses or not, is nothing more than a gimmick. Now we’ve got something a little more interesting, actually a lot more interesting, and it’s the Tegra 3. According to a slide acquired by Bright Side of News the Tegra 3 will come in two flavors: one for tablets, one for smartphones. The tablet version will feature 4 ARM Cortex A9 processors that can go as high as 1.5 GHz, a graphics processor that’s 3x as fast as what’s inside the Tegra 2 today, support for decoding Blu-ray movies, and it’ll even support displays with a resolution of up to 1920 x 1200 pixels. That’s one hell of a chip, and if the Q4 2010 sampling date is to be believed then it’ll probably end up in products hitting store shelves in the summer of 2012.

Next up is the mobile version, the one that fits inside that sliver of a sexy smartphone you always carry with you. It’ll be available in either dual or quad core configurations, and it’ll support displays with a resolution of up to 1366 x 768 pixels. It too shares the same Q4 2010 sampling date. We’ll likely hear more about these two chips at Mobile World Congress, due to take place in a little under a month. We need to know if the next Tegra is made using a smaller process node, 32 nanometer perhaps, and which customers have signed up to offer retails products based around the chip.

Qualcomm, Samsung, Texas Instruments, they’re all watching NVIDIA from afar and waiting to see if they get anywhere with their mobile efforts. Whether or not NVIDIA does … in the end we, as consumers, win thanks to all the competition.

HeyTell is a walkie-talkie application developed for Android and iOS. The App was developed by Steven Hugg and Jen Harvey,...