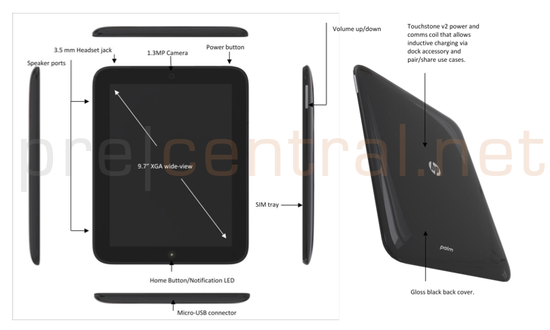 Last week we got a glimpse of HP Palm’s plans for a tablet, but got little info on specs. A planning document from last year just surfaced, however, giving the whole detailed run-down of the Topaz (or at least what Palm is aiming for). Let’s bust out some bullets, shall we?

The full 360-degree graphic above reveals that there won’t be any classic mute switch, but instead you’ll be able to mute by holding the volume-down key on the side.  A Wi-Fi-only version of the Topaz will be the first out of the gate, followed by HSPA, CDMA, and LTE versions.  No NFC support, sadly. This is all looking more or less like what we were expecting, but the really cool stuff is what HP Palm is planning for the Touchstone.

On top of charging inductively (i.e. without wires, like the Pre and its successors), the Touchstone dock accessory will be upgraded  to include wireless picture, website, audio, maps, contacts, and video sharing. Although the Topaz itself won’t have HDMI-out, the Touchstone 2 dock will, meaning you just rest the tablet on the accessory, and blammo, your video is streaming to the TV.

The software on the Topaz gets glazed over, hinting at some cloud connectivity using something called “tap to send”, and Flash support in the browser, but the hardware’s what’s really catching my eye.

Palm has been talking about making a tablet ever since they got snatched up by HP, and it’s good to see their product starting to come to life. Though Apple has a significant lead both in capturing the nascent tablet market with the iPad and establishing a lead in apps, the Topaz has a few neat tricks up its sleeve that I trust will give the BlackBerry and Android competition a bit of a fight. What do you guys think? Given these specs, does the Topaz stand any more of a chance in tablets than the Pre or Pixi families do in the smartphone arena?

It's only been a week since we gave away an iPad and we already have another big item to give...