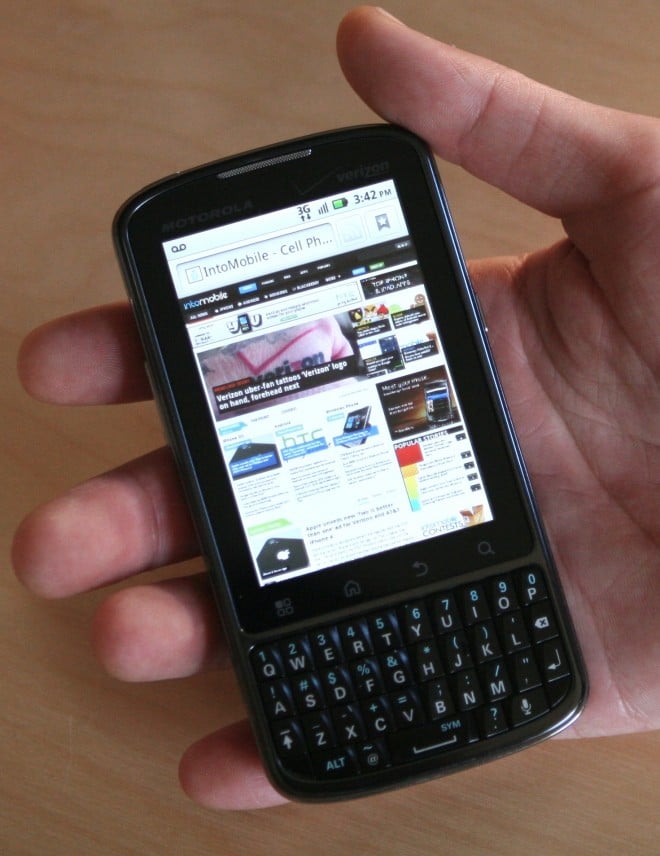 The Motorola Droid Pro for Verizon is aimed at bringing an Android phone to the BlackBerry set. With a full QWERTY keyboard and some extra security features, this smartphone is trying to to appeal to enterprise users who are sick of the limitations that BlackBerry offers. Does this handset give you the best of both worlds? Read our full review to find out. 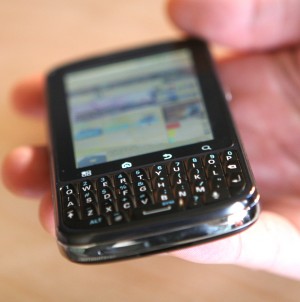 The Motorola Droid Pro is a nice mix of a BlackBerry and the rest of the company’s Droid lineup. The Motorola Charm also tried to combine a touch screen with a QWERTY keyboard but we didn’t like that keyboard and felt the screen was too small and cramped to be effective.

I think the Droid Pro manages to have a nice mix of screen real estate and keyboard. At 3.1-inches, the display is not the best and the 320X480 resolution does feel a bit lacking if you’re trying to watch videos but it’s quite responsive and good enough. Underneath the screen you have capacitive keys for the standard four Android buttons: settings, home, back and search. These work well.

The keyboard is probably the most appealing feature of this device and having a bad one could really sink the Droid Pro. Fortunately, I found this keyboard to be quite nice. Like on modern BlackBerry smartphones, the keys all have ridges or frets on them to help you differentiate between the letters. The keyboard is much smaller than a BlackBerry Tour but I didn’t find it to be a hassle. There’s auto-correction software with the physical keyboard, so you don’t have to worry too much about punctuation or misspellings. It learns too, so I can quickly get access to all the futuristic slang I use in text messages and e-mails.

I haven’t had a full, physical keyboard since my Droid days and, even then, I barely ever used the slide-out keyboard. I was actually surprised how much I liked the full keyboard on this, as it made typing a bit easier without sacrificing much of the form factor.

At the top of the device you have the standard headphone jack at the top – just as I like it – and there’s also the power and unlock button. A silver bezel around the perimeter gives it a nice look and this seems to be able to stand up to a pounding. This side button shows you exactly who Motorola is trying to attract, as the default setting makes it bring up the calendar. You can change that in the settings and I quickly changed that to my camera button, although that still had problems (more on that later).

Inside, you have a 1 GHz processor, 8 GB of internal storage with a microSD slot that can take up to 32 GB, Bluetooth, GPS, WiFI and a SIM card slot. Even though Verizon uses CDMA for service in the United States, the Motorola Droid Pro is a world phone, so you can expect to be able to get service in over 200 countries (a fact which Big Red is pushing in its ads). The Verizon overseas costs can quickly add up though but globe-trotters will be happy to know you probably won’t need to get a new phone if you’re abroad for business or pleasure.

If you just read the specs and look at the pictures, the Motorola Droid Pro may seem like an odd duckling that’s sort of a tweener between a BlackBerry and Android smartphone. It is, but there’s something undeniably likable about this handset. It’s not as angular as the old Droids, not as large as a Droid X and the touchscreen is much better than what you can get with the BlackBerry Torch.

The device feels light in your hand but still feels like a solid business device despite the plastic finish. The keyboard seemed like it would be too small to get real work done but it was superb for me. I’m having a difficult time fully articulating why I like the feel of this phone so much, but I do. 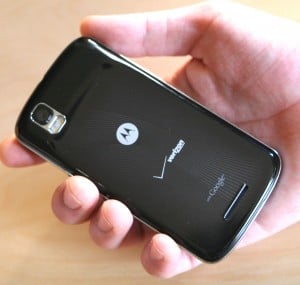 The Motorola Droid Pro runs Android 2.2 Froyo with Motorola’s UI that can be found on the Droid 2 or Droid X, so there isn’t much new if you’ve seen any of those devices. The UI isn’t quite MotoBlur but you do get the option of including many of the same widgets and apps – there are some that tie in your social networks, as well as aggregate your news feeds.

Interestingly enough, because of the device’s form factor, you’ll be spending 90% of your time in portrait mode. While it does sport an accelerometer the only time I turned it landscape mode was when I was using the camera. For the most part, Android works well as a portrait-only phone but the small screen and form factor does make it kind of odd to play landscape games like Angry Birds.

It’s a Verizon Android phone, so you can expect things like the Skype Mobile app and the NFL app out of the gates. You can also look forward to a pre-loaded VPN cliets, QuickOffice and other productivity tools.

Some people aren’t very fond of the Motorola UI that can be found on this device and on something like the Droid 2 but I have no real problems with it. You get the seven homescreens, access to multiple widgets and the customized camera UI. The software’s good but we still can’t help but wish we had Android 2.3 on this for the overall speed boost. 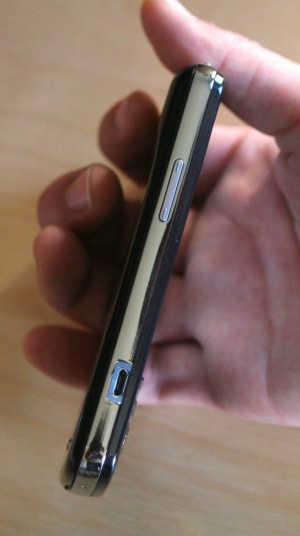 Nothing too surprising here, as it rocks the standard Android WebKit browser. The 3.1-inch screen can get a tad bit cramped but there’s intelligent zooming and formatting, so I had no problems with it. With Android 2.2 Froyo, it rocks the Google JavaScript V8 engine, so it can chew through most web pages easily.

The Motorola Droid Pro rocks a 5-megapixel camera with dual-LED flash and I was not very happy with it. The picture quality was fine for a camera of this class but it’s not as sharp as something with a similar megapixel count like the Samsung Fascinate. What’s really frustrating is that the camera UI is not really suited for this device.

It’s the same camera UI that’s found on the Droid X but it’s not optimized for the portrait mode. The shutter button is a software button on the lower right hand corner of the screen, so it’s quick to snap photos one-handed, but everything else is formatted for the landscape mode. You wind up having to hold it in a weird way to take pics in landscape mode and I don’t like it.

The dual-LED flash is okay but it’s annoyingly bright. If you’re trying to snap some shots at a bar or restaurant, be prepared to make sure everyone in the place will know it. Low-light photos are okay but no cell phone can really get great shots in low lighting.

To be fair, you do have plenty of features like face detection, effects and uploading to social networks and e-mail is a breeze, but it’s just kind of a pain to use. Outside of the browser, e-mail and calendar, I do use the camera feature of my smartphone, so I expect it to quick and easy. 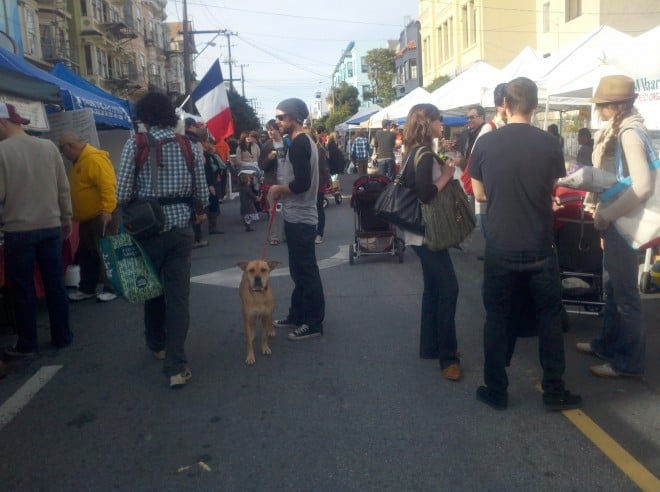 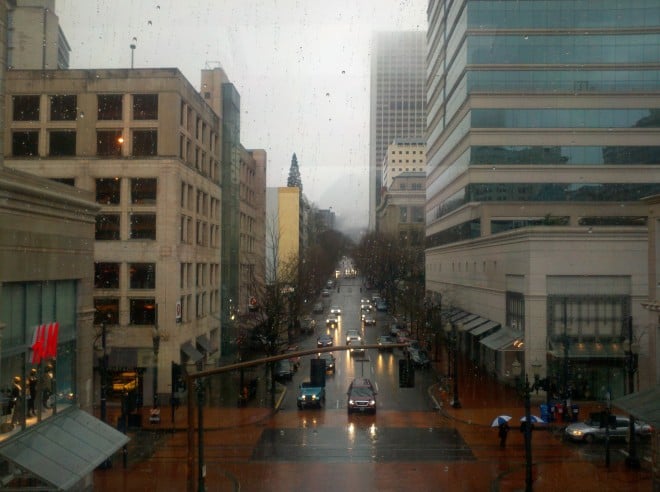 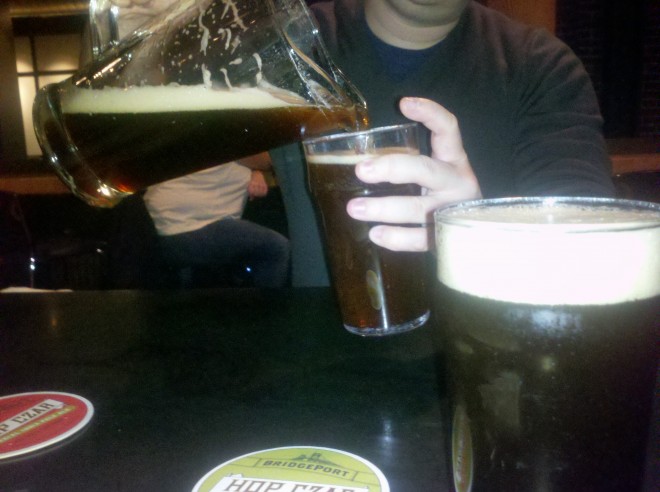 As for the video camera, you can expect to record video at 480p resolution (720 by 480), which is a shame considering 720p HD has become the standard on a high-end handset and many devices are even including 1080p HD recording. You do have multiple options and effects though, but I’m pretty disappointed overall. 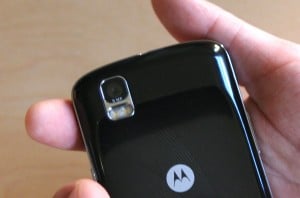 Android phones aren’t the multimedia powerhouses that the Apple iPhone 4 is but it’s solid enough to play most of your media and video files. The small screen and the relatively-low resolution means videos aren’t great to watch on this device but Motorola’s not aiming this at the type of crowd that’s looking for super good multimedia on the good. Still, any modern device should be able to do some solid videos on the go and this kind of falls short.

Motorola knows how to make a solid phone and Verizon has a good network, so you can expect good voice calls and strong data coverage in many markets. Voice calls sounded clear, didn’t have any static and callers told me that I sounded clear (they could tell that I was on a cell phone, though). Verizon 3G data coverage was strong in both San Francisco and the Portland area and we’ll be updating this review with the world phone functionality after Mobile World Congress.

If you’re looking to replace your BlackBerry with this Motorola Droid Pro, you’ll be in for some transition pains when it comes to battery life. I received this handset at 10:30 a.m. and it was about dead by 4 p.m. Granted, I was using it heavily to send e-mails, search for new places while I was traveling and using lots of data-intensive apps but the crowd that Motorola is trying to reach will need this for that. Get ready to keep an extra charger at your office if you’re really using this thing as a business device.

The final take: The best of both worlds?

The Motorola Droid Pro is an oddly likable device despite its flaws. It’s not quite the messaging powerhouse that a BlackBerry is, the camera isn’t great, it doesn’t have 2.3 Gingerbread and the battery life leaves a lot to be desired but I still really like using this thing.

The one-handed nature, the good feel in the hand and the cool keyboard make me like the Motorola Droid Pro probably more than I should and I highly recommend this for Verizon users who need world-roaming capabilities and want a full keyboard.

There's another Motoblur device in town for the Indian Market, and it's nothing we haven't seen before. Instead of the...