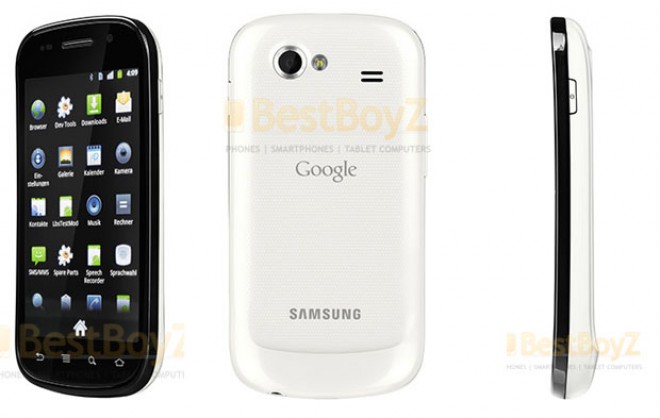 The Nexus S, no matter what you think of it, is quite a sexy looking device. But, what if, instead of the traditional black-slab-of-smartphone aesthetic you could get your Nexus S in white trim? You’d have something that looks even sexier than before. Well, good news, Nexus S fans may soon have the option to choose  as the color of choice for their Android 2.3 Gingerbread-powered smartphone.

Just like the white HTC EVO 4G, the Nexus S is getting a small design refresh in the way of a white variant. Better yet, the White Nexus S . Why they can’t ship at the same time, we don’t know, but judging from the challenges that Apple has faced with the white iPhone 4, we’re not going to automatically assume that making a phone in white is just as easy as making it in black. The picture above comes to us from the German blog, BestBoyz.de, and it’s supposedly, “definitely shipping to Germany.” So it’s entirely possible that the states may not see this device, but once the white Nexus S goes official, we’ll find out for sure.

The Nexus S is a great device in its own right, but I do wish we’d see more Nexus devices in a shorter amount of time. The Hummingbird processor used in the Nexus S is very snappy, but with the first wave of dual-core phones upon us, it just doesn’t seem worth it from a hardware perspective. Software wise, the Nexus S is the only device you can purchase at the moment running Android 2.3 Gingerbread. We saw the Sony Ericsson Arc that was running Gingerbread, but we still have no solid release date on that handset.

If the white version of the handset does end up coming to the States, it’ll likely stay a Best Buy exclusive, just like the original. So, while we wait, maybe you can choose whether you want to get the Galaxy S 4G, or a white version of an existing 3G-only phone.

Leaked documentation from Verizon Wireless suggests the wireless carrier is once again updating its data plans for both feature phones...