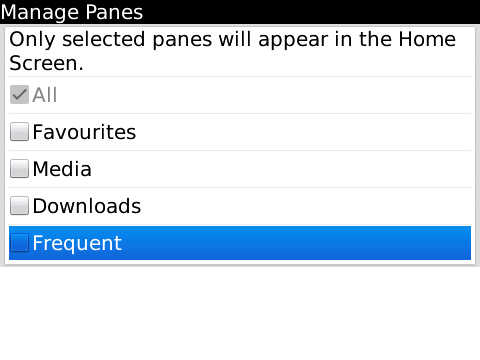 RIM has announced BlackBerry OS 6.1 as the introduction of augmented reality functions, but there will be a few more subtle goodies included. In some of the first leaked screenshots of the software, the home screen options will allow you to pare down down which panes are displayed, minimizing time spent flipping from one to the other. There’s also a new option for dictating how many icon rows are shown when the home screen is reduced.

From what we had seen at the announcement, BlackBerry 6.1 will also offer support for new kinds of barcode reading, and additional OpenGL support for 3D rendering. NFC is also a given, since the Torch 2, Curve “Apollo”, and Bold “Dakota”, are said to include the hardware and launch with OS 6.1. Near-Field Communications will allow for stuff like contactless payments à la PayPass, or getting through security checkpoints like folks currently do with company-issued ID cards.

As is, the BlackBerry 6 home screens are split up into multiple categories of apps, filtering for all, media, favourites, and a few other categories. Dumping automatically-generated categories, like frequently used and downloads would make sure you don’t have redundant listings which hog up precious screen real estate, that’s for sure. As for the fixed number of rows, I’m still not sure why they even included the windowshade thing in the first place. The PlayBook OS is eventually headed to smartphones, and if it’s any indication, maybe that extra screen space will show live previews of apps when multitasking in the future.

RBC Capital Markets did a survey of some 1000-odd consumers at CES, where 6% said they were likely to buy...