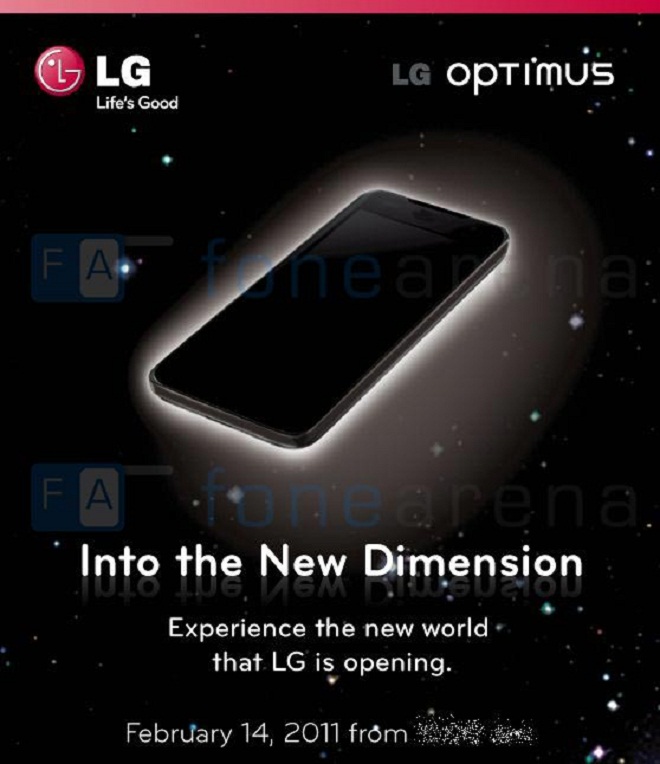 Well, Mobile World Congress 2011 just got a bit more interesting as this teaser suggests that LG will be showing off a glass-free 3D Optimus smartphone.

We know that LG has been showing off 3D screens that don’t require glasses and we actually saw these at CES 2011 and liked it. It appears like these screens will be similar to the Nintendo 3DS, as the limited size of the screen makes it easier to produce the 3D effect without glasses.

We have also heard rumors that this glass-free 3D Optimus would be what Sprint wanted to show off at its early February event but I don’t know LG would want to one-up itself before Mobile World Congress. Perhaps we’ll see an LG 3D tablet at the Sprint event?

So, do you want a glass-free 3D Optimus smartphone? While some may see this as a huge gimmick, well-done 3D on the go could add a lot to the smartphone experience. Just imagine how much fun Angry Birds would be if it were in 3D or how effective other apps could be with another dimension.

Sure, this would also lead to further Android fragmentation problems because apps would likely have to be specifically written for 3D to full take advantage of this but I’m sure developers will be stepping up to the plate. What do you think? Is 3D just a gimmick or is it the next big evolutionary jump in mobile computing?

One thing is for sure, the Mobile World Congress 2011 show if going to be packed with news. Along with this 3D smartphone from LG, we’re expecting to also see the next generation of Galaxy S phones, the much-rumored PlayStation Phone and much, much more. You can follow all of the latest news and reviews in our MWC 2011 section.

[Via All About Phones]

A new report from Appcelerator and IDC suggest that app developers are still eying Apple iOS first but Android and...