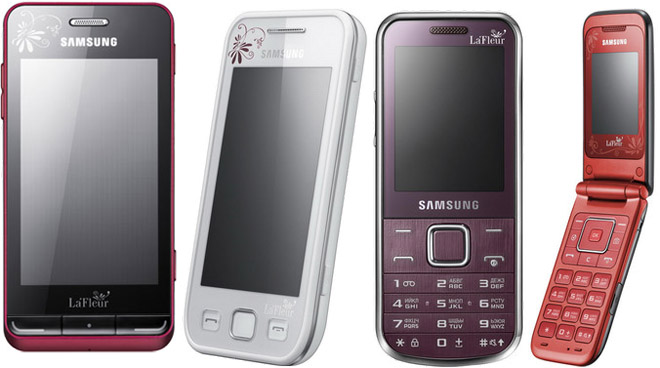 Samsung has launched new members of its La Fleur collection in Russia. The new devices include the Wave 525, Wave 723, C3530 and E2530 (respectively pictured above). In other words, we’re talking about phones that shoot for low and mid-level mobile phone buyers.

Usually special edition devices remain unchanged specs wise, and that’s the case here as well. The only difference between the original phones and their La Fleur counterparts is that the latter come with flowery patterns on the outside. Moreover, some stylized mobile content is also included, such as wallpapers and screensavers.

As a reminder, Samsung’s original La Fleur collection included two all-touchscreen features phones – F480 and D980. Later on, it was expanded to include the super-popular S5230 Star model which was sold in Germany.

That said we presume that Europe will also get Samsung’s La Fleur phones in no time as they do sound like hot Valentine’s Day gifts.

HTC Merge headed to Alltel instead of Verizon?

We were beginning to think we'd never hear of this handset again, but at long last, the HTC Merge has...